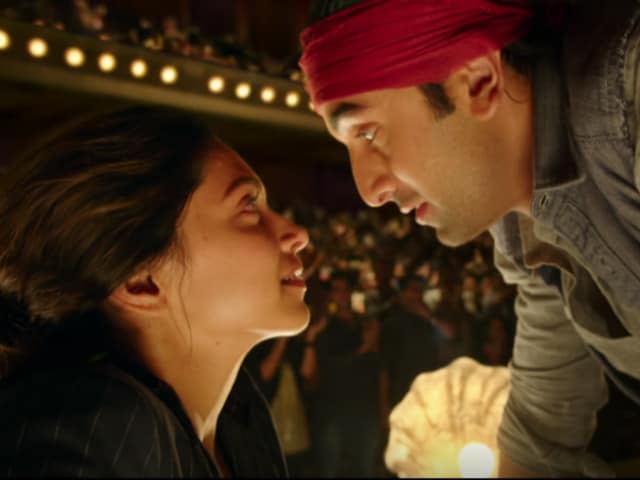 A still from Tamasha.

Tamasha is about Ved (Ranbir), who loses himself in the process of conforming to the standards set by him and his family. Deepika's Tara enters his life to remind him of his true self and helps him realise his potential. "Tara is an Indian woman rooted in our value system but she is very modern in her approach," said Ranbir

Ranbir Kapoor has revealed that director Imtiaz Ali has taken references from the immortal love story of Radha-Krishna for their upcoming romantic film Tamasha.
The film, also starring Deepika Padukone, is about Ved (Ranbir), who loses himself in the process of conforming to the standards set by him and his family. Deepika's Tara enters his life to remind him of his true self and helps him realise his potential.
"Tara is an Indian woman rooted in our value system but she is very modern in her approach. Imtiaz goes back to the time of Radha-Krishna," said Ranbir.
"Radha sacrificed herself because she knew Krishna had potential and she told him 'You go, be yourself, even though you don't want to be with me; but I will sacrifice my love for you because you can become something'. I think he was really inspired by that and the character of Tara is also based on that," Ranbir said in an interview in New Delhi.
Deepika said that the story of Ved and Tara is relatable and very relevant in today's time, where she feels relationships have become mechanical.
"Tamasha is about Ved, who is not doing what he wants to do. There is a lot of pressure from him, from his family to be a certain person and he starts losing himself in the process and he starts becoming somebody that he is not. He requires a Tara in his life to pull him out of that situation and make him understand the person that he really is. This is a story which is very relevant and I think people will relate to Ved and Tara," she said. (Also Read: Ranbir Kapoor is 'Scared' of Deepika Padukone. A Tamasha Confession)
Though the film has a profound story, the actors say it is told in a manner entertaining enough for the viewers.
"It is an Imtiaz Ali film at the end of the day and it is an intense and passionate love story. But it is also told in a very entertaining manner. It is very relatable," Deepika said.
This is the first time Ranbir and Deepika are working with Imtiaz together. Ranbir worked with the director in 2011 movie Rockstar, Deepika has collaborated with Imtiaz for Love Aaj Kal.
Ranbir feels that female characters in Imtiaz's films are different from those in other movies.
"Imtiaz's women characters have a lot of Indian values but are also modern. The kind of language she speaks, the clothes she wears, the ideologies she has, is something we have not seen on screen," he added.
The on screen couple said that they feel lucky that they never had to compromise on their wishes to comply with the expectations of their family.
"We have been fortunate that we have families, who have been supportive of our career decisions. He, of course, comes from a film family so his parents are proud that he has become an actor but I am sure if he wanted to do something else, they would have supported him in that too. I don't come from a film family but my parents support my choice," said Deepika.
"But there are many people who don't live the life they want to live; they are constantly living for other people, or setting targets for themselves that are a little unrealistic or are in professions, where they don't really enjoy themselves. Maybe it is the money which is the draw or sometimes life throws itself on you in a way where you have no option but to do something that you are not keen on doing," the actress said.
Tamasha releases on November 27.