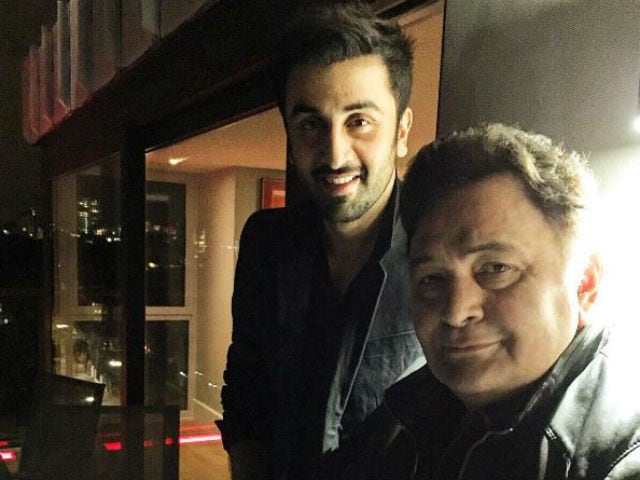 This image was posted on Instagram by Neetu Kapoor

Ranbir has shared screenspace with his parents Rishi and Neetu Kapoor in the 2013 comedy film Besharam, directed by Abhinav Kashyap.
One of Bollywood's top actors, Ranbir has a huge fan following not just for his looks, but also his versatility.
He started his career in Hindi films as an assistant director, working with filmmaker Sanjay Leela Bhansali on the film Black. Ranbir then made his acting debut in Sanjay's tragic romance Saawariya in 2007.
The film didn't do wonders at the box office, but Ranbir went on to star in movies like Wake Up Sid, Ajab Prem Ki Ghazab Kahani, Rocket Singh: Salesman of the Year, Rockstar, Barfi!, Yeh Jawaani Hai Deewani and Tamasha.
His roles, particularly as a deaf and mute man in Barfi! and as a musician in Rockstar, are worthy of praise. Ranbir's next big screen outing is Karan Johar's Ae Dil Hai Mushkil, with Aishwarya Rai Bachchan as co-star.
Ranbir's friends and co-workers from the industry also wished him:
Karan Johar expressed his love:


Ok guys! So Caption this! - What could the b'day boy be telling me? #AeDilHaiMushkil#AeDilKiDiwali#HappyBirthdayRanbirKapoorpic.twitter.com/JGNCfuBCzp


Bst wishes to #Ranbirkapoor, u r one of the most smart & talented actor in our industry.Can't wait to watch #ADHM#HappyBirthdayRanbirKapoor


A very happy birthday to one of my fav actors and person #RanbirKapoor looking killa in #ADHM LOVE.


a shout out to #ranbirkapoor . happy birthday shinning star. can't wait to see u in #ADHM