Ranbir Kapoor will feature as Sanjay Dutt in the latter's biopic being helmed by Raju Hirani. His trainer said that Ranbir is on a strict diet and is being trained in different manners to suit the role 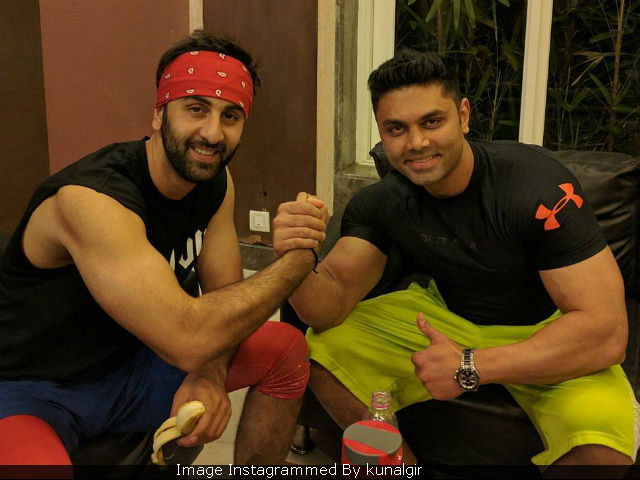 Ranbir Kapoor, who will be seen as Sanjay Dutt in the Raju Hirani-directed biopic on the actor is working out hard to resemble the Khalnaayak star. Ranbir, 34, will be seen in three different looks- beefy body, a lean look from 90's and the third look will showcase his phase in drug rehab. He has gained more than 13 kgs of weight which comprises of muscle and no fat to match up with the muscular physique of Sanjay Dutt. Baahubali star Rana Daggubati has helped Ranbir in a big way to help him build his physique like Sanjay Dutt. Rana has introduced him to a Hyderabad-based trainer Kunal Gir, who earlier trained him for Baahubali.
Ranbir is on strict diet, revealed Kunal. He shared, "There has been a change in Ranbir's diet. He has started eating a lot of vegetables now days earlier he used to eat very less and his meals comprised mainly of meat earlier. Now Ranbir eats his food on time and has a proper balanced diet." Kunal also added that he carries haleem every other weekend as its Ranbir's favourite food item, and if he doesn't then Ranbir gets upset.
Kunal Gir said, "He has gained more than 13 kgs now which is all muscle and no fat. His waist line has gone down by an inch and he has been loosing fat while building up. Ranbir has an hour-and-a-half of intense work out sessions. It?s a big challenge bulking up Ranbir up like Sanjay, but the former is committed to-do whatever needs to be done. He wakes up at 3 am, has a protein shake and goes back to sleep."
Rana Dagubatti had also undergone rigorous training sessions to play Bhalla Deva in S S Rajamouli's magnum opus Baahubali: The Conclusion.

Ranbir had earlier said that he doesn't think he deserves to play Sanjay Dutt. "It is a very difficult film. To represent Sanjay Dutt and work with (director) Rajkumar Hirani, I don't even think I deserve this film. But, I am looking forward to working on it," the Ae Dil Hai Mushkil actor told news agency PTI.
Raju Hirani's ambitious project also stars Masaan actor Vicky Kaushal and Paresh Rawal, who will play Sanjay's father and actor Sunil Dutt. The shooting for the film began in January and Dia Mirza has also joined the cast. Sanjay Dutt, 57, completed his jail term on February 25, 2016. He will make a comeback Omung Kumar's Bhoomi. Meanwhile, this year Ranbir will be seen in Jagga Jasoos opposite Katrina Kaif.