Ranbir Spills the Beans About the Kapoors' Diwali 'Secrets' 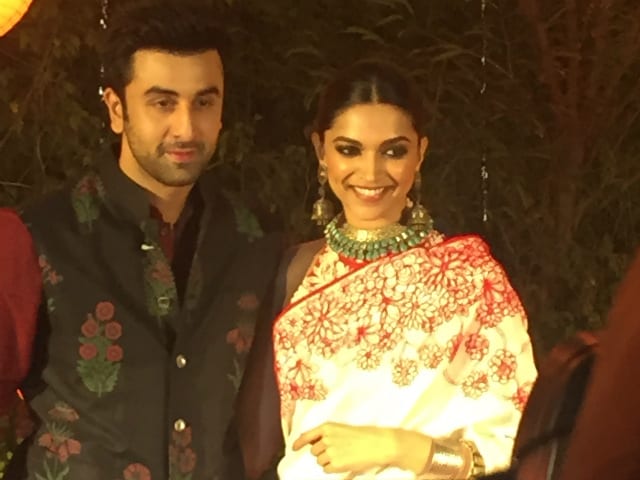 "After my grandfather's demise, things are quite like what all families do. I will visit my grandmother at Chembur, we have Laxmi puja and we distribute gifts to the staff," said Ranbir Kapoor. Deepika also revealed how Diwali is celebrated at the Padukone house

Ranbir Kapoor and Deepika Padukone, who set off fireweorks onscreen together, dazzled Delhi on the eve of Diwali as they attended a celebratory party in the city on November 10.
The duo, who have been working in Bollywood for eight years, made their debuts at the same time but in films that were pitted against each other - Deepika co-starred with Shah Rukh Khan in Om Shanti Om, Ranbir featured opposite Sonam Kapoor in Saawariyan. Both movies hit screens on November 9, 2007.
Asked about their journey in Bollywood so far, Ranbir, who looked a bit anxious, said: "It's been a splendid journey and the media and fans have been supportive but nothing has changed." To this, Deepika added, "We still feel like newbies."
That's hard to believe from an actress who has been occupying the top berth in Bollywood for a while now.
So what's Diwali like for the two of them? Ranbir's grandfather Raj Kapoor used to have quite a Diwali bash. Is it still the same at the Kapoor residence?
"After my grandfather's demise, things are quite like what all families do. I will visit my grandmother at Chembur, we have Laxmi puja and we distribute gifts to the staff," said Ranbir.
Is there a Kapoor Diwali secret?
"Well none. My father may lose at cards and mom rolls her eyes, but in the evening we have to light a shagun ka phooljhadi but no crackers. And then there's Laxmi Puja and a good meal," he added.
At the Padukone residence, the scene is much like what you see in one of Deepika's latest advertisements which features her parents Ujjala and Prakash Padukone against the backdrop of Diwali. There will be a lot of diyas and rangoli. "My sister and I receive Diwali gifts and the four of us just make the most of the time together," Deepika said.
Since Diwali is also about taash, is Ranbir good at card game Bluff?
"You know, I know nothing about cards. As a matter of fact Deepika was teaching me UNO," Ranbir confessed.
Deepika added, "UNO is just what I know. I have no ideas how to play any of those Diwali card games. You will find me indulging in Diwali sweets and savouries while others are playing."
In Bollywood, all roads on Diwali lead to the Bachchan residence where the first family organizes a "party not-to-be-missed," the two stars admitted.
So what Diwali gift do they want?
"A bag I spotted at a boutique in New Delhi, which Ranbir is buying me," Deepika said with a grin. Ranbir, on the other hand, wanted a positive response from the audience for Tamasha.
Well, so be it. Happy Diwali.