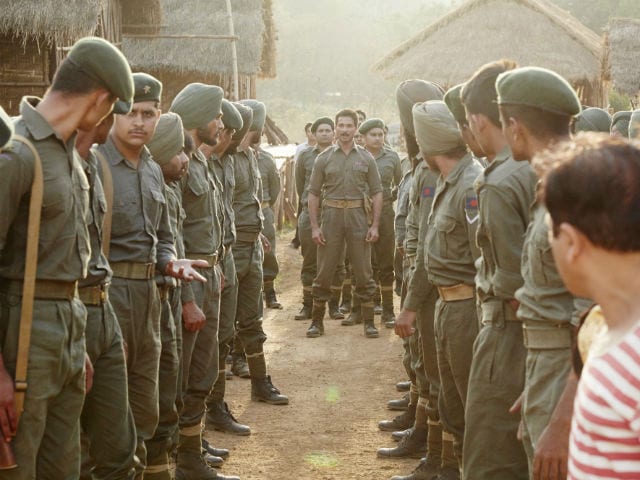 Rangoon: Shahid Kapoor features as a soldier fighting in Burma

A special screening of new film Rangoon - starring Kangana Ranaut, Shahid Kapoor and Saif Ali Khan - will be held for the family of Netaji Subhas Chandra Bose in Kolkata, makers of the film have revealed. Rangoon, directed by Vishal Bhardwaj, is a tale of romantic intrigue set in the World War II trenches of what was then Burma. Kangana Ranaut stars as a '40s actress named Miss Julia who is torn between two men - her producer and paramour Rustom Billimoria, played by Saif Ali Khan, and a soldier named Nawab Malik, played by Shahid Kapoor, who she meets when she's sent to entertain the military troops.
Netaji's connection with Burma was deep. His Azad Hind government-in-exile was headquartered in Rangoon, and his famous battle cry of 'Give me blood and I will give you freedom' was raised at a rally he held in Burma in 1944. Netaji's Indian National Army fought against British troops in the Imphal-Kohima sector during World War II, alongside Burmese and Japanese forces.
Watch the trailer of Rangoon here:

The setting for Rangoon is Burma but filming took place in inaccessible locations in Arunachal Pradesh, under difficult conditions. Earlier this month, the cast narrated their experiences of shooting in a video on the making of the film.
Watch behind-the-scenes shooting video from Rangoon:

Rangoon, one of the most-anticipated films of the year, is Kangana's first film with Vishal Bhardwaj, Saif's second and Shahid's third. Mr Bhardwaj previously directed Saif Ali Khan in Omkara and Shahid Kapoor in the films Kaminey and Haider.
Rangoon releases this Friday.