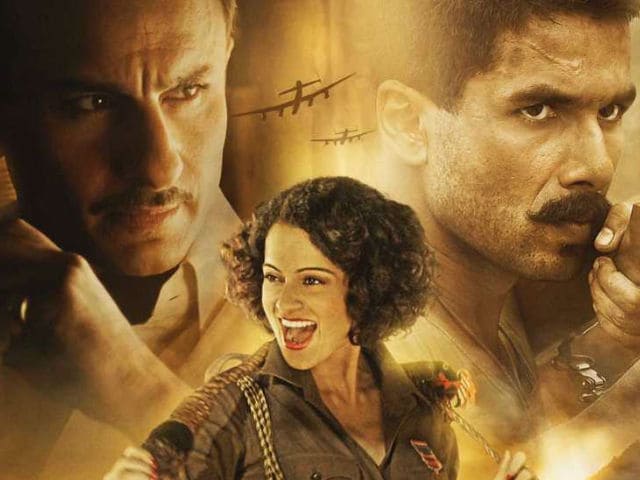 Bollywood film Rangoon is all set to open in theatres on Friday. The film starring Kangana Ranaut, Shahid Kapoor and Saif Ali Khan is directed by Vishal Bhardwaj and is set in the times of World War II. Vishal Bhardwaj, who took good seven years to make his ambitious project, told news agency PTI that he is happy that the film is releasing on schedule. "It's a very strange feeling that you've lived with a dream for seven years and now it's no more yours. It's that of the audience. To see it come alive on the big screen is a very happy feeling," he told PTI.
War drama Rangoon stars Kangana as '40s actress Miss Julia while Saif features as her love interest, producer Rusi Billimoria. Shahid plays the role of a soldier, Nawab Malik, who falls in love with Kangana's character. The trailer reveals that Miss Julia is forced to travel to Burma for putting up performance shows for the soldiers with Nawab Malik in charge of her protection. Nawab Malik's arrival complicates the relationship between Rusi and Julia, who also appears to be smitten by the soldier.
Rangoon is releasing after its fair share of controversy and legal hassles (as is the case with almost every film these days). Kangana Ranaut, 29, plays the role of a feisty actress by the name of Miss Julia, whose portrayal has been compared to Australian actress and stuntwoman Mary Ann Evans, more popular by her screen name 'Fearless Nadia.' The makers and Kangana have categorically denied that Miss Julia's character is based on Fearless Nadia but the late actress' brother-in-law is reportedly suing the makers of Rangoon for copyright infringement. "I think there is some legal hassle around that. First of all, we cannot comment on a matter when it's already in the court, but we can assure you that it's not based on any living or dead person," Kangana told news agency IANS.
Fearless Nadia vs Miss Julia aside, Kangana Ranaut has promoted the film just the way her character in the film would have done - aggressively. Kangana gave interviews and made headlines for her reported cold war with Shahid Kapoor. In her explosive interviews, she discussed everything from how filming intimate scenes made her uncomfortable to Shahid Kapoor's erratic behaviour and noisy workout drill.
Kangana came to Karan Johar's talk show Koffee With Karan, whose PR drill for Rangoon was unusual in many ways.
The Rangoon trio, in several interviews, talked about each other's stellar performances and praised the director's vision. Kangana worked with Vishal Bhardwaj for the first while Shahid has made Haider and Kaminey with him. Saif Ali Khan starred in his Omkara in 2006.