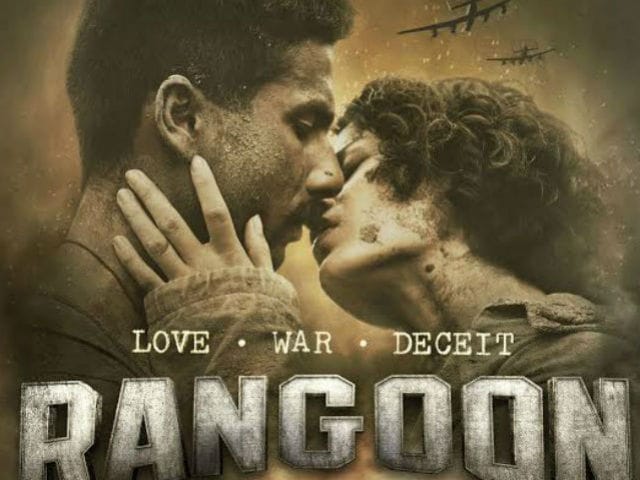 As the release date of Vishal Bhardwaj's film Rangoon gets closer, the makers of the film released a new song titledAlvida. Shahid Kapoor shared a two-minute long song on social media on Valentine's Day. In the song Alvida, Kangana Ranaut is seen torn between her love for Shahid Kapoor and Saif Ali Khan's possessiveness for her. The song highlights the darker sides of the relationships between Kangana, Shahid and Saif. Alvida is a slow track sung by Arijit Singh, written by Gulzar and composed by Vishal Bhardwaj. Rangoon is set against the backdrop of World War 2. The film will see Kangana Ranaut portray the role of Miss Julia, a 1940s film star. The movie is scheduled to release on February 24.
Watch Rangoon song Alvida here:

Rangoon tracks the story of a love triangle between a filmmaker (Saif Ali Khan), his muse (Kangana) and a soldier (Shahid Kapoor).
The film is the third collaboration between director Vishal Bhardwaj and the Udta Punjab actor. Rangoon will also see Saif Ali Khan team up with filmmaker Vishal Bhardwaj after 11 years.
Shahid Kapoor was last seen in 2016 movie Udta Punjab along with Alia Bhatt, Kareena Kapoor and Diljit Dosanjh. He is currently busy shooting for Sanjay Leela Bhansali's Padmavati, co-starring Deepika Padukone and Ranveer Singh.
Meanwhile, Saif Ali Khan, who was last seen in 2015 movie Phantom, is currently co-producing and working on an untitled project by Akshat Verma. The 46-year-old actor has also begun shooting for the remake of the 2014 Hollywood movie Chef.
The Queen actress, who was last seen in Katti Batti, is currently shooting for Hansal Mehta's Simran. She is also committed to star in Ketan Mehta's biopic on Rani Laxmibai. The 30-year-old actress will also be making her debut as director and producer with an English language short film The Touch.