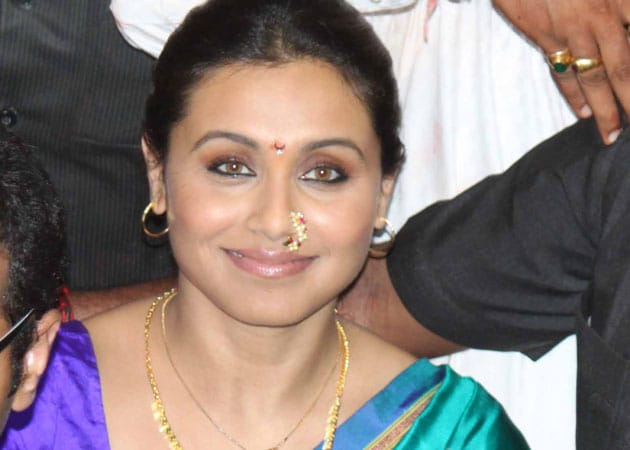 Rani Mukerji, commonly acknowledged as one of Bollywood's most talented actresses, today confirmed that she married director Aditya Chopra on April 21 in Italy. Rani, 36, and Aditya, 42, were rumoured to have been in a relationship for years.

Rani Mukerji, commonly acknowledged as one of Bollywood's most talented actresses, today confirmed that she married director Aditya Chopra on April 21 in Italy. Rani, 36, and Aditya, 42, were rumoured to have been in a relationship for years.
In the last two years, Rani has been starred in No One Killed Jessica, with Vidya Balan, the acclaimed Talaash, with Aamir Khan and Kareena Kapoor, and Aiyaa opposite Malayalam star Prithviraj. (Also read:Just married: Rani Mukerji, Aditya Chopra; Karan Johar attends wedding )
The popular actress has been working in the Hindi film industry for over 15 years. She made her debut in Hindi films with Raja Ki Aayegi Baraat (1997). Her first screen appearance, though, was five years before that - in a cameo for her father's Bengali film Biyer Phool (1992).
Rani Mukerji's parents - Ram and Krishna Mukerji - form part of the big Mukerji family in the Hindi film industry. Ram Mukerji is a former film director and one of the founders of Filmalaya Studios. Krishna Mukerji is a former playback singer. Rani's brother Raja Mukerji is a film producer turned director. Krishna Mukerji's sister is National Award winning Bengali actor Debashree Roy. (Also read: Rani Mukerji: The one person I missed was Yash Uncle )
Rani Mukerji's other notable relatives in the Hindi film industry include cousins Kajol and Ayan Mukerji. While Kajol is ranked among India's top actors, Ayan Mukerji is the young director of the popular films Wake Up Sid and Yeh Jawani Hai Deewani.
Though her debut film fetched her the Special Jury recognition at the Star Screen Awards that year, it earned lemons at the box-office. 1998's Ghulam opposite Aamir Khan gave her a break with the song Aati Kya Khandala becoming a topper on hit lists. It remains associated with her to this day.
Years 2002 -2006 were the best for Rani Mukerji in films. Some of her hit films in those years are Saathiya, Chalte Chalte, Yuva, Hum Tum, Veer-Zaara, Black, Bunty Aur Babli and Kabhi Alvida Naa Kehna. However, Mangal Pandey: The Rising (2005) with Aamir Khan wasn't the hit everyone thought it would be.
In later years, Rani Mukerji featured primarily in movies produced by Yash Raj Films. Many films like Ta Ra Rum Pum and Laaga Chunari Mein Daag under-performed at the box-office and many said her penchant for the Yash Raj banner cost her professionally.
In 2012, No One Killed Jessica, produced by UTV Motion Pictures, somewhat revived her career and the next year, Talaash proved that Rani's shine had not dimmed.
Rani and Aditya Chopra, the reclusive filmmaker son of Yash and Pamela Chopra, have been linked together for years. His 2009 divorce sparked rumours of an impending wedding with Rani, who is equally reclusive and guarded about her personal life. Rani and Aditya were first photographed together in January 2012 while returning from a vacation with his parents.
Rani Mukerji confirmed in a statement released today that she and the Dilwale Dulhaniya Le Jayenge director were finally married: It was a beautiful wedding in the Italian countryside with just a few of our close family and friends with us. The one person I missed terribly was Yash Uncle, but I know he was there with us in spirit and his love and blessings will always be with Adi and me.
Filmmaker Karan Johar, who directed Rani in Kuch Kuch Hota Hai and Kabhi Alvida Na Kehna, was a guest at the wedding.