Rani Mukerji: I'm Enjoying Being Married And Doing Nothing 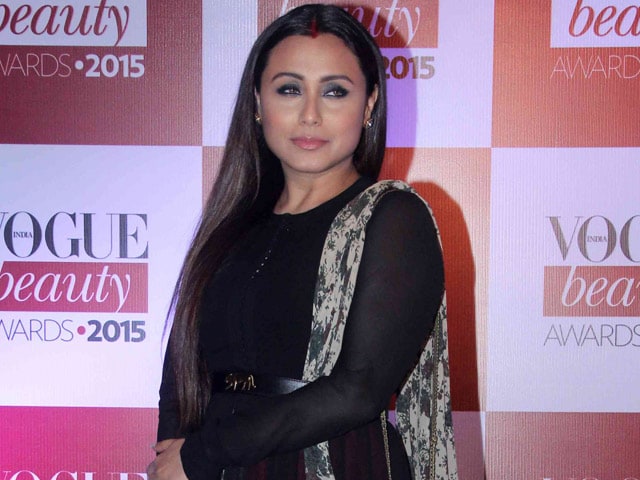 Rani Mukerji at an event in Mumbai.

"I'm not delusional. I'm conscious of what the audience wants to see me in," said Rani Mukerji

Actress Rani Mukerji, married Yash Raj Films (YRF) head Aditya Chopra last year, said that she is currently enjoying "being married and doing nothing".
In an interview to Vogue India August 2015 issue, Rani talked about life post marriage, her choice of films and her future plans.
When asked if she sees herself producing or directing a film in the future, Rani, who has completed two decades in Bollywood, said: "There's nothing stopping me. Adi (Aditya Chopra) would never say no. But I see the way my husband works. He's the most hard-working person in his studio and the last one to leave at night. I wouldn't want to risk his or his company's name by doing something juvenile. For now, I'm enjoying being married and doing nothing."
As for five years from now, she wants to see herself doing some "kickass films" and having "lovely babies beside me as I go to the set".
Rani, who has delivered powerful performances in films like No One Killed Jessica and Mardaani, credits three men, including her husband, for spotting her talent in her initial days.
"Yes, he (Aditya Chopra) did, and so did Shah Rukh (Khan). Aamir (Khan) recommended me to Mukesh Bhatt and Vikram Bhatt for Ghulam (released in 1998). These three men have been integral to my career," said the actress.
She also recalled the time when filmmaker Karan Johar asked her to lose weight before Kuch Kuch Hota Hai.
"Karan is so hyper. If you see that scene today, where's the weight? I was actually happy that I didn't look like everyone else. Today, people think about it far more than we used to," said the actress, whose film choices have changed as she feels that "it's embarrassing for a 37-year-old to do the roles she did in her twenties."
"I'm not delusional. I'm conscious of what the audience wants to see me in," she stressed.