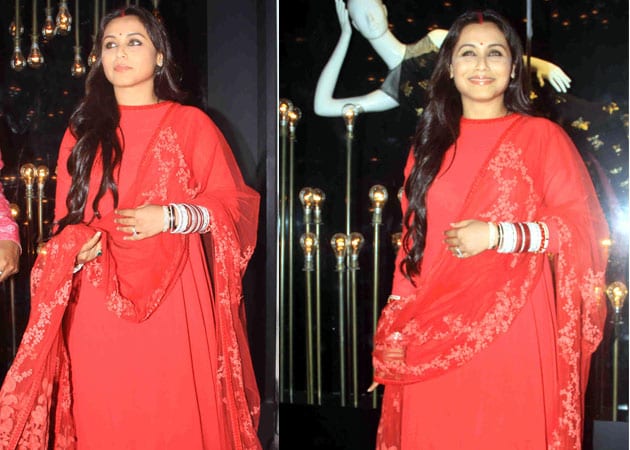 Actress Rani Mukerji made her first official appearance as the Chopra bahu at the launch of the Di'vani store in Mumbai on May 29.

Actress Rani Mukerji made her first official appearance as the Chopra bahu at the launch of the Di'vani store in Mumbai on May 29. Rani married filmmaker Aditya Chopra on April 21 in a private wedding in Italy. (Also read: Revealed: Rani Mukerji's Role in Mardaani)
Swathed in yards of red Sabyasachi, churas upto her elbows and sindoor in her parting, Rani looked every bit the newlywed as she played hostess with mother-in-law Pamela Chopra. The reclusive Aditya was, not surprisingly, nowhere to be seen. He has been invisible this entire year so far, despite the long-awaited wedding. Rani with her mother-in-law Pamela Chopra
The Mrs Chopras giggled, posed with a bunch of balloons and didn't seem to feel the absence of either Aditya or his brother Uday. Di'vani is a collection of film-inspired outfits owned by the Chopras. 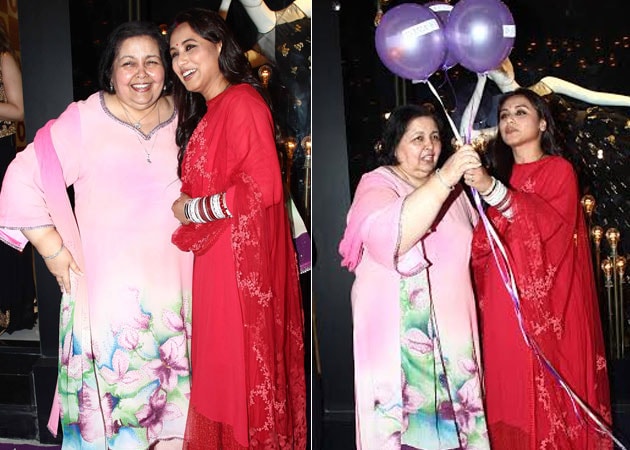 Rani shares a joke with Pamela Chopra. On the right, the two pose with a bunch of balloons.
Rani told reporters at the launch: "The news of my wedding has been so sweetly accepted by all my fans. They have given me their blessings, a lot of love. I really feel very blessed to have such wonderful people wishing me."
Guests at the launch of the store included most of Aamir Khan's family minus the actor himself, actresses Alia Bhatt and Parineeti Chopra, and real-life couple Sushant Singh Rajput and Ankita Lokhande. Aamir Khan's mother Zeenat, Kiran Rao, Parineeti Chopra and Alia Bhatt also attended the event
Rani is currently shooting her first film as Mrs Aditya Chopra, the Yash Raj-produced Mardaani in which, it has been revealed, she plays a cop.
Watch