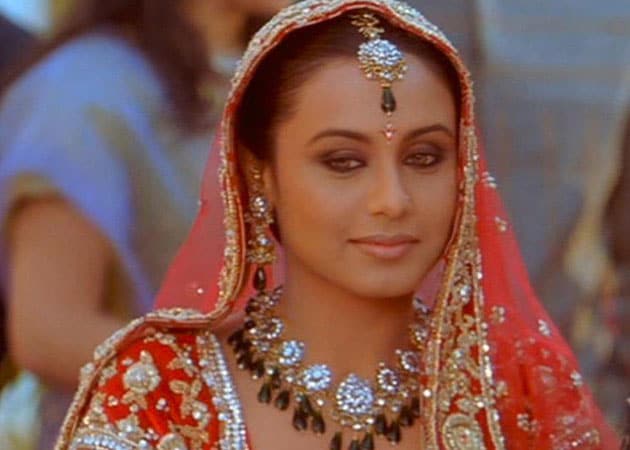 Rani Mukerji in a still from Kabhi Alvida Naa Kehna.

Though her marriage to filmmaker Aditya Chopra was a hush-hush affair, actress Rani Mukerji has revealed that her wedding outfit was designed by friend Sabyasachi.

Though her marriage to filmmaker Aditya Chopra was a hush-hush affair, actress Rani Mukerji has revealed that her wedding outfit was designed by friend Sabyasachi.
Rani, 36, and the 43-year-old director married in an intimate ceremony in Italy this year. (Also read: Happy to Have Sabyasachi as my Brother and Friend: Rani Mukerji)
When asked whether she donned Sabyasachi's lehenga on her D-day, the Bengali beauty, who was in the capital last night for the designer's show on the opening day of India Couture Week, said, "It had to be Sabya. He is my brother and a good friend."
Sabyasachi has not designed her look in her upcoming home production Mardaani but Rani promised that she will be seen in his designs during the promotion of the crime drama.
"I will be sporting loads of Sabyasachi during the promotion of Mardaani," she said.
The newly-married actress became nostalgic to be a part of Sabyasachi's opening show.
"I really enjoyed the show. We all have witnessed the beauty and magic he created on the ramp. When I say Sabya's cloth I can only see his hardwork and sweat that go behind them.
"Each time you come for the Sabya's show it is better than the last time. The set which was designed in the form of a train really made me nostalgic," the Bunty Aur Babli star said.
Sabyasachi kicked off the fashion extravaganza with his new collection 'Ferozabad' last night.
The ramp was decorated like the compartment of a luxury train and the designer beautifully depicted the humdrum of a train journey. (Also read: Aditya Chopra Has Not Finalised Next Project, Reveals Yash Raj Films)
Models sashayed down the ramp wearing sarees teamed with high-neck blouses, anarkalis, lehengas and shararas.
Sabyasachi also brought the rugged look of men on the ramp back as they dazzled the runway in bandhgalas, embroidered trousers and khadi coats.
The six-day fashion event will see nine of the country's top designers - Anamika Khanna, Anju Modi, Gaurav Gupta, Manish Arora, Manish Malhotra, Monisha Jaising, Rina Dhaka, Rohit Bal and Varun Bahl - showcasing their work.
Shree Raj Mahal Jewellers is the title sponsor this year and its designer jewellery collection will be seen on the ICW runway.