Ranveer Singh wrote: "Do not try this at home. Or at the train station" 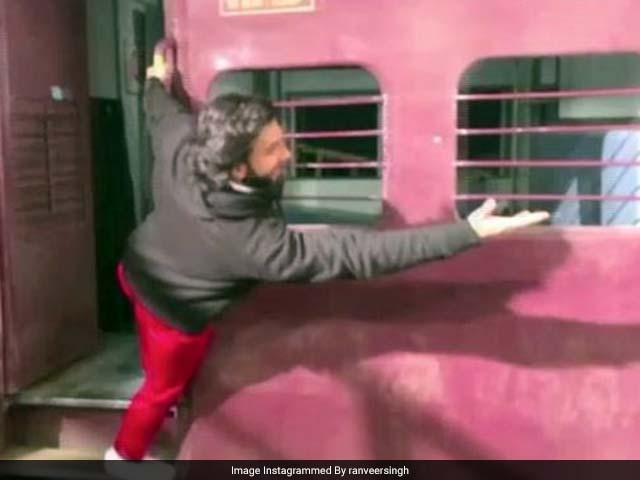 Ranveer Singh in a still from the video shared by him (courtesy: ranveersingh )

Are you a 'trained filmy'?
Are you as awesome as Ranveer Singh (is that even possible!)?
Then, do not try the Dilwale Dulhania Le Jayenge stunt Ranveer just did. The 31-year-old actor recreated the iconic train sequence from Shah Rukh Khan's cult romance and his partner in crime was choreographer Ganesh Acharya. For those who need refreshing memory, DDLJ was rounded off on an epic note with the climactic train scene, featuring Simran's (played by Kajol) reunion with Raj (played by Shah Rukh). The train scene went on to became iconic of sorts and is still often recreated or alluded to. While Raj and Simran just got it right in the train scene, Ranveer seemed to have failed the test for the 'trained filmy' title.
Ranveer was spotted lying on the station ground after his attempt to help his partner come on board. "This stunt is performed by trained Filmys. Do not try this at home. Or at the train station," Ranveer Singh wrote on Twitter.


This stunt is performed by trained Filmys. Do not try this at home. Or at the train station.
. pic.twitter.com/BKrFl8fVxF

It is not sure what Ranveer and Mr Acharya were exactly up to but grapevine has it that the duo were reportedly shooting for an advert.
Ranveer also tried his hand at remaking a portion of Tu Mere Samne from Shah Rukh's 1993 movie Darr. In the original version Shah Rukh can be seen running around snow-capped mountains with heroine Juhi Chawla. Ranveer was no less.


HAD to be done! @iamsrk #JuhiChawla @yrf

Ranveer Singh was last seen in Aditya Chopra's Befikre, which performed moderately at the theatres. Cine-goers are looking forward to his next with Sanjay Leela Bhansali - Padmavati - in which he plays the role of emperor Alauddin Khilji. Padmavati stars Ranveer's rumoured girlfriend Deepika Padukone as Rani Padmini and Shahid Kapoor as her husband Ratan Singh.