Ranveer Singh, Sara Ali Khan Went To A Wedding. This Pic Of Them Is Trending 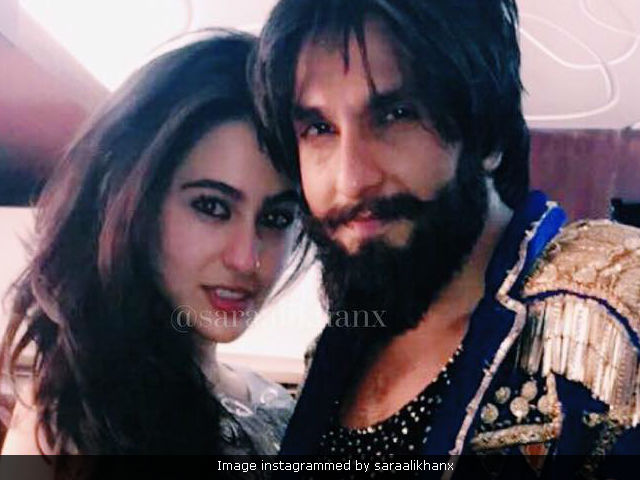 Actor Ranveer Singh and Saif Ali Khan's daughter Sara attended a wedding in Hyderabad for which a good chunk of Bollywood also turned up. GVK scion Keshav Reddy married Veena Reddy in an elaborate ceremony on Sunday. And the pre-wedding rituals started on Saturday at Hyderabad's Taj Falaknuma Palace. There was a sangeet ceremony on January 28 which was followed by a wedding cum reception dinner on January 29. Ranveer, who also performed at the sangeet, met Sara and fan clubs shared the pictures which have now gone viral. Ranveer, 31, wore a rather jazzy piece while Sara, 23, looked dainty in Manish Malhotra couture.
Here's the pic of Ranveer and Sara which is now viral:

Like we said before there were many more guests from Bollywood and they all seemed to have been smitten by Manish Malhotra's collection. The 51-year-old designer posed with his "favourite glamour girls." Actress Sridevi and her daughters Jhanvi and Khushi looked perfect.

Then there was Shilpa Shetty, who shimmered at the sangeet:

Bollywood stars took out time from their schedule to attend the wedding celebrations of Sanjay and Aparna Reddy's son to the daughter of pharma baron Chinnappa Reddy.