Katrina Kaif on Instagram: If that was not enough, Ranveer also, of course, captioned the video "Der aaye durust aaye! Welcome to the random world of Instagram!" 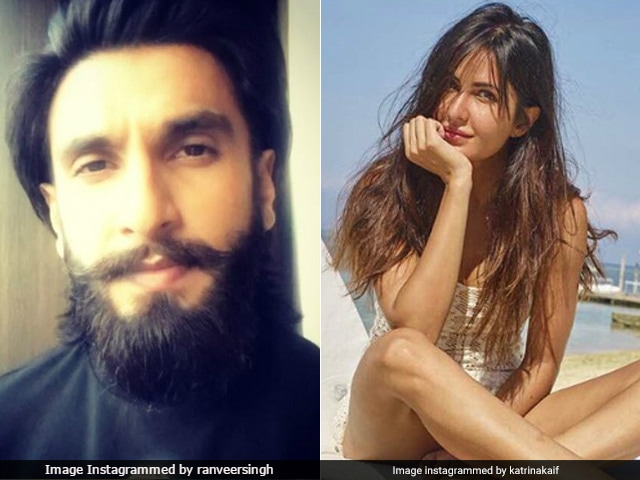 Ranveer Singh and Katrina Kaif have not co-starred yet (courtesy ranveersingh, )katrinakaif

Katrina Kaif's Instagram had a new follower with Ranveer Singh joining in. But before that, Katrina was given a typically-Ranveer Singh style welcome on the social media platform. Total filmy. Katrina, who also recently made her debut on Facebook, is now three-day-old on Instagram and Ranveer assured that she's retained her star status in her fashionably late arrival on Instagram. "Der se aane waale ko star samjha jaata hai," said Ranveer. Rings a bell? For those it doesn't, Ranveer actually dubsmashed a dialogue, originally spoken by veteran actress Bindu, from Salman Khan's 1997 cult comedy Judwaa. If that was not enough, Ranveer also, of course, captioned the video "Der aaye durust aaye! Welcome to the random world of Instagram!" Ranveer Singh and Katrina Kaif are yet to work together in a film.

Meanwhile, having ventured on to Instagram, Katrina Kaif just can't keep idle. From goofy pictures to setting particular fashion goals and Instagram pranks, she has experimented well already. Oh, and the Internet is swooning over her every move on Instagram.

Well, Ranveer is not alone. Katrina Kaif has also previously been welcomed on Instagram by her co-star and former rumoured boyfriend Salman Khan and Alia Bhatt.
Meanwhile, Katrina Kaif also shared a glimpse of her photoshoot for Peruvian photographer Mario Testino's Towel Series, which is crazy viral now. Katrina is the first Bollywood star to feature in Mario Testino's Towel Series photoshoot. "Thank you Mario Testino for the wonderful experience of shooting for the legendary Towel Series. You must come see us again soon," she wrote.


Thank you @mariotestino for the wonderful experience of shooting for the legendary #TowelSeries ... You must come see us again soon . Here u go @anaitashroffadajania