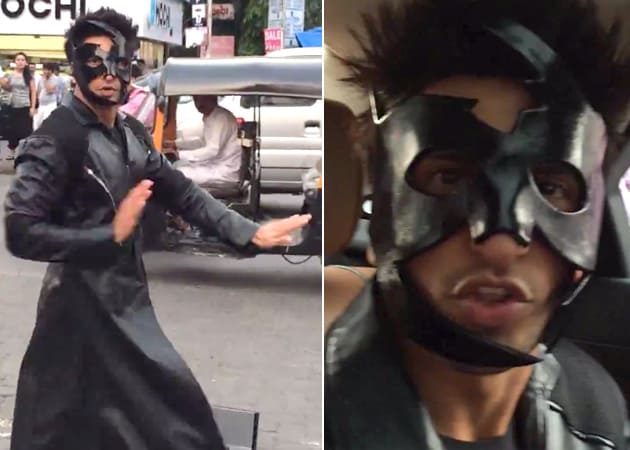 Hrithik had dared Ranveer to pose for his fans on any busy street in Mumbai a few days back.

Ranveer responded to Hrithik's dare, which is capable of giving the Krrish actor a run for his money

Bollywood actor Ranveer Singh, famous for his red carpet antics took his quirkiness to another level this time.

He responded to actor Hrithik Roshan's Bang Bang dare, which is capable of giving Hrithik a run for his money.

Hrithik had dared Ranveer, on microblogging website Twitter, to pose for his fans on any busy street in Mumbai a few days back.

To @RanveerOfficial my #bangbangdare get out of ur car n pose on d middle of any Main Street of mumbai fr your fans! Hahaha,bolo..accept??

But given Ranveer's zest for drama, the actor took the dare to a whole new level, lacing it with some extra madness. Dressed in a Krrish mask and costume, Ranveer danced to Hrithik's song Main Aisa Kyu Hoon in the middle of a busy street.

Though Ranveer admits he could not match Hrithik's dancing style and finesse, but he still managed to look hilarious in his attempt.

Ranveer is seen dancing to the sheer amusement of the people, who failed to recognise the actor. Funnily, a policeman intervened to put an end to his antics, by shutting the music system but the Ram-Leela actor apologised and switched the music back on. The actor then removed his mask and ran towards his car.