Ranveer Singh's new ad has been branded sexist by social media. Actor Sidharth tweeted that it was a new low for women's rights in the workplace in India 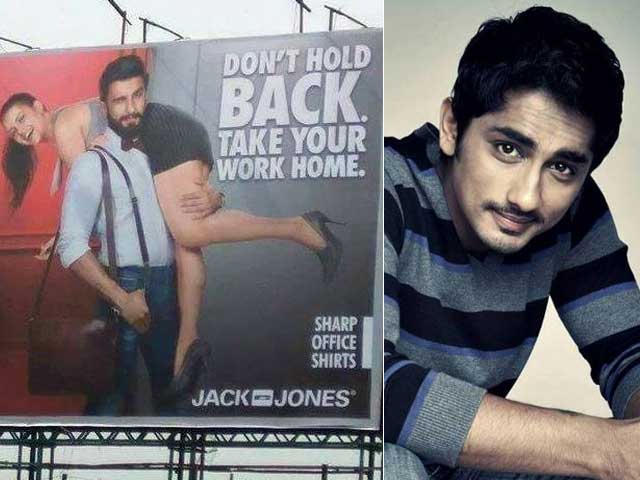 Ranveer Singh's new advertisement for a clothing line has stopped traffic online. The ad, which shows the actor dressed in office wear with a woman over his shoulder, watched by a grinning butler on the side, has been criticised as sexist and offensive. The tag line of the ad says, 'Don't Hold Back. Take Your Work Home.' The ad, now pulled by the clothing brand, has been widely slammed on Twitter and earlier this week, Rang De Basanti actor Siddharth posted a strongly-worded tweet dismissing Ranveer's ad as 'a new low' for women's rights at the work place. "It wasn't malicious," Ranveer said in a session with Shekhar Gupta. Ranveer Singh, 31, and Siddharth are both trending on social media now.
'What were they thinking?' asked Siddharth in his tweet:


A new low for women's rights in the workplace in India. What were they thinking? #Failpic.twitter.com/3PW5mMaKOt

Women Continue To Be Objectified In Sexist Jack & Jones Ad https://t.co/l3lp3PunGi via @YouthKiAwaaz

Would you call this ad sexist and objectionable? @ascionline@RanveerOfficial@pinthecreep@JackJonesIndiahttps://t.co/jkcsqWoiwhpic.twitter.com/SlB42MaxWp

Some asked for a complaint to lodged against the ad.


Please log your complaint against this ad on this link. Totally inappropriate and sexist. @pinthecreep@ascionlinehttps://t.co/oLqiZ1ijhNpic.twitter.com/xyoaygcDF2

And as a result the clothing brand was forced to pull the ad.
"As a progressive brand that is loved by youth the world over, we take our responsibility of always being respectful, as seriously as we do our bold attitude. We regret that a billboard of our current campaign has caused people distress. We did not intend to offend anyone, and have discontinued it immediately," Vineet Gautam, country head, Bestseller India which handles Jack and Jones sales told Mint.
Ranveer Singh, busy with Befikre promotions, spoke to Shekhar Gupta in an Off The Cuff session and said, "Jack and Jones ad wasn't malicious but wasn't going down well so got it taken down."


@theprintindia@RanveerOfficial@ShekharGupta Do lodge a #complaint if you find any ad to be #offensivehttps://t.co/fyIiVZ3X2P

The actor has been featured in controversial commercials before - last year, an advertisement for an innerwear brand showed the actor wrestling a rubber shark. After being red-flagged by People for Ethical Treatment of Animals or PETA, the advertisement was run with a disclaimer. Ranveer's ads for a noodle brand, which he promotes as 'Ranveer Ching,' has also been criticised by some as racist.
Meanwhile, Ranveer launched a new song from his film Befikre yesterday, a rousing wedding anthem titled Khulke Dulke.


Did you really think, an Aditya Chopra film wouldn't have a full on Punjabi gaana? #KhulkeDulke ;) @befikrethefilmhttps://t.co/cbk0wpKqGG

Aditya Chopra's Befikre, in which Ranveer co-stars with Vaani Kapoor, will hit the screens on December 9.