Remember This Kajra Re Moment With Amitabh Bachchan, Aishwarya?

Abhishek made his debut in 2000 with Refugee, co-starring Kareena Kapoor and has appeared in films like Dhoom, Bunty Aur Babli, Kabhi Alvida Naa Kehna, Bluffmaster! and Paa 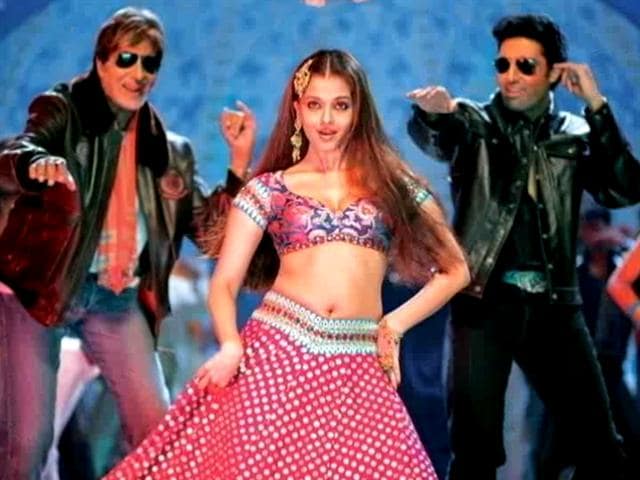 Big B, Aishwarya and Abhishek in a still from Kajra Re.

It's now standard operating procedure to see the Bachchans everywhere together so an old picture posted by Abhishek Bachchan reminds us of a time when it was a novelty. The photo, taken at the 2005 IIFA Awards in Amsterdam, features Abhishek with future wife Aishwarya Rai and father Amitabh Bachchan. With them is choreographer Shiamak Davar.
The Bachchans performed - Abhishek for the first time on stage - Kajra Re from their film Bunty Aur Babli. The performance was the grand finale of the award show that year. Abhishek described the moment Aishwarya and Mr Bachchan joined him on stage as 'insane.'
Such energy. Much wow:

#flashbackfridays my 1st ever stage performance. IIFA Amsterdam in 2005. This photo was taken in the wings just as we got off stage. The finale was Kajrare with "the B" and "the Mrs.". Choreographed by my dearest Shiamak Davar. It was an amazing night and the performance especially the finale when dad and Aishwarya joined on stage was insane! Remember all of us being so pumped that we couldn't sleep all night after the show ended. My full love and respect to Shiamak and his dancers for making the show such a smash. They're the best! Such a wonderful memory. Must do another stage show again soon.

Abhishek, 40, and Aishwarya, 42, married in 2007 and their daughter Aaradhya was born in 2012.
Abhishek made his debut in 2000 with Refugee, co-starring Kareena Kapoor and has appeared in films like Dhoom, Bunty Aur Babli, Kabhi Alvida Naa Kehna, Bluffmaster! and Paa. Last seen in 2015's All Is Well, he is currently filming Housefull 3, co-starring Akshay Kumar, Riteish Deshmukh, Jacqueline Fernandez, Lisa Haydon and Nargis Fakhri.
Aishwarya, on the other hand, took a sabbatical after Aaradhya was born and made a comeback with Sanjay Gupta's Jazbaa last year. She will soon be seen in Omung Kumar's Sarbjit and Karan Johar's Ae Dil Hai Mushkil.
Amitabh Bachchan's upcoming films are Te3n and Pink.