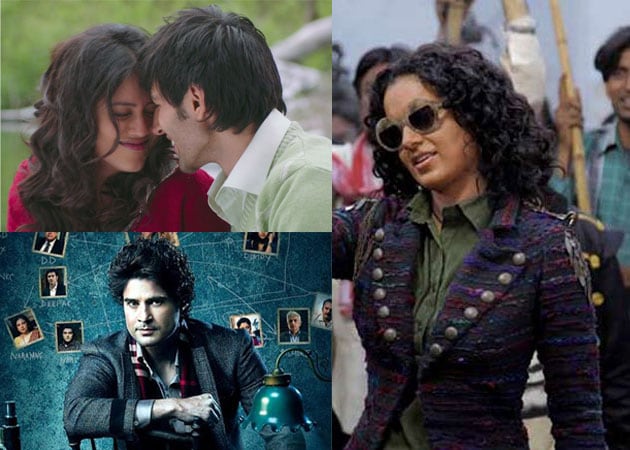 Stills from the movie Kaanchi, Samrat & Co and Revolver Rani

After Queen, Kangana Ranaut is back at the box office as Revolver Rani and she would battle it out with musical Kaanchi and thriller Samrat & Co for the top honours when the three movies hit the screens on Friday.

After Queen, Kangana Ranaut is back at the box office as Revolver Rani and she would battle it out with musical Kaanchi and thriller Samrat & Co for the top honours when the three movies hit the screens on Friday.
Kangana loves to push the envelope by stepping into unconventional roles and she continues the trend with Revolver Rani, which sees her in a never-seen-before mode of a don shooting guns and mouthing dialogues in profane language. (Also read: Kangana is the perfect choice for Revolver Rani, says director )
With her brilliant performance in Queen, Kangana has not only raised the bar for her contemporaries but for herself too thus raising fans' expectations from her. Debutant director Sai Kabir describes her character as "ugly" and non-glamorous. (Also read: Revolver Rani has the signs of being a classic, says Tigmanshu Dhulia )
Kangana will face stiff competition from Rajeev Khandelwal, another brilliant actor, in Samrat & Co. A lot is riding on the film - it is the first feature film as a producer by Kavita Barjatya, known for making TV shows. Besides, Rajeev too needs a big hit.
The flavour and setting of the two films are completely different. Tigmanshu Dhulia-produced Revolver Rani is set in the backdrop of the notorious Chambal area, while detective movie Samrat & Co, featuring Rajeev as a suave investigator, has been shot in the scenic Himachal Pradesh and director Kaushik Ghatak has used VFX to make the plot interesting and engaging.
Subahash Ghai is all geared to give them a tough competition with his directorial venture Kaanchi, the third film in the fray. Sans big names, the film, starring Kartik Tiwari and Mishti Mukherjee, has a rural set up and has been shot in a hill station too. Its tone and tenure is serene.
The film marks Ghai's comeback after five years.