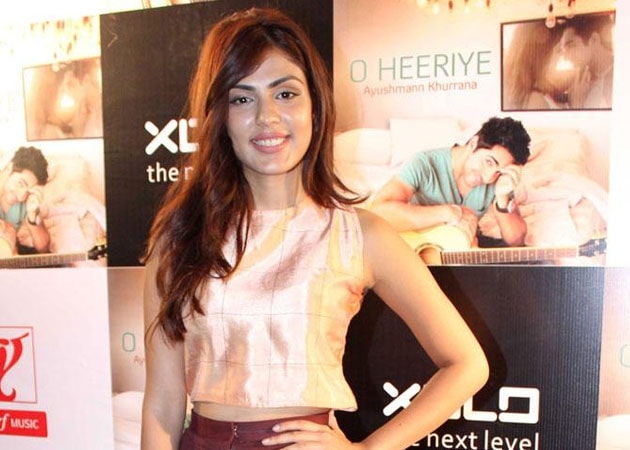 Rhea made her big screen debut in 2013 with Mere Dad Ki Maruti.

Actress Rhea Chakraborty has been signed up as the female lead of Y-Films' Bank Chor for a "cracker of a role" with Riteish Deshmukh. She says that she's excited about the "roller-coaster ride".

Actress Rhea Chakraborty has been signed up as the female lead of Y-Films' Bank Chor for a "cracker of a role" with Riteish Deshmukh. She says that she's excited about the "roller-coaster ride".
"Bank Chor is a roller-coaster ride and I'm delighted to be on it. I've had a blast with the team on Mere Dad Ki Maruti and I'm sure this is only going to be bigger and better," Rhea said in a statement. (Also read: VJ-turned-actress Rhea Chakraborty chased and groped )
The actress started her career as a video jockey and then made her big screen debut in 2013 with Mere Dad Ki Maruti. She was also seen opposite Ayushmann Khurrana in his single, O Heeriye.
Now, she will be seen in Bank Chor, produced by Yash Raj Films' banner Youth Films Division Y-Films, which also brought out Mere Dad Ki Maruti.
For the role, the makers "needed someone with spunk, who could be cute and hot at the same time besides speak 2,000 words per minute".
"Rhea speaks 8,000 words per minute in real life! She hit the ball out of the park on the other fronts as well and with her outrageous sense of humor she's gonna kill it," said Ashish Patil, business and creative head, Youth Films, brand partnerships and talent management at YRF.
Bank Chor is a comic-caper that tells the story of three morons trying to rob a bank who pick the worst day possible when everything that can go wrong, goes wrong, and how they're inadvertently caught in the crossfire of cops, industrialists and corrupt politicians. It is directed by Bumpy and produced by Ashish.
Besides Bank Chor, Rhea has an exciting line-up of films. Up next is Rohan Sippy's Sonali Cable, in which she plays the titular role.
She will also be seen in UTV Spotboy's much awaited Babbu Ki Jawani. There are also more big announcements around the corner, one from YRF itself.