"Thank you daddy for giving me everything to help me grow, happy happy Father's Day to the most incredible father! Love you tons," Sonam Kapoor wrote on Twitter 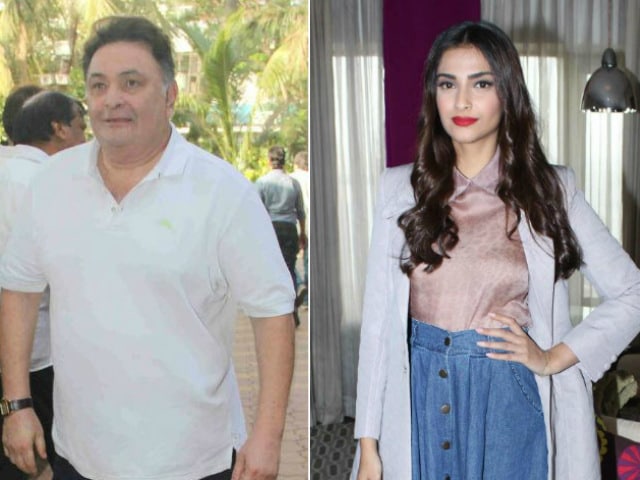 It's Father's Day on June 19 and Bollywood celebrities have shared their wishes on Twitter and Instagram on Sunday. In separate tweets, veteran actor Rishi Kapoor shared pictures of himself with his son Ranbir Kapoor and father actor Raj Kapoor.

This is what actor Amitabh Bachchan wrote on Twitter:

Shah Rukh Khan's received a handmade gift from his youngest son AbRam and Gauri shared a picture on Instagram:


Thank you dad for being the most amazing friend I ever had... Love you


Swami Vivekananda said "You cannot teach a child anymore than you can grow a plant. The plant develops its own nature. It also teaches itself, but you can help it go forward in its own way. The role of a teacher is to "loosen the soil a little, so that it may come out easily. Put a hedge around it. See that it is not killed by anything. Supply the growing seed with the materials for the making up its body, bringing to it the earth, the water, the air...and then your work stops. It will take all that it wants by its own nature. So, with education of the child, the child educates itself." Thank you daddy for giving me everything to help me grow, happy happy Father's Day to the most incredible father! Love you tons @anilskapoor!


If there's one role which I'll never tire of, it's that of a father. As my children grow, so do I. #HappyFathersDay


My biggest hero, inspiration & the one responsible for making me the person I am today#HappyFathersDay to all dads pic.twitter.com/KLLEjUemeR


Missing dad on this #FathersDay. I know he is always with me as he did throughout my life. #HappyFathersDay to all of you.

Happy Father's Day to all the special people... pic.twitter.com/VdaNmbRNFH

My dad, my HERO !!!
I am blessed. #HappyFathersDaypic.twitter.com/XsypYgTIxz

Fathers never die. They just make a bigger place in our consciousness after they are gone. I am guided by love every day. #HappyFathersDay

Some dads remain the coolest!! #mydaddystrongest#HappyFathersDay to my dad, my hero!! pic.twitter.com/7aUoDCClet

Actress Lara Dutta's tweet for her father was accompanied by this one:


Only daughters can convince U 2 paint UR nails bright pink! #mydaddystrongest#HappyFathersDay@Maheshbhupathipic.twitter.com/ylDJvHtZvk

Actress Shilpa Shetty, who thanked her father on Twitter, also shared a message for husband Raj Kundra on behalf of their son Viaan:


Happy Father's Day Daddy. Thankyou for being the Bestest daddy to @ShamitaShetty and me. Lovvvee uuuuuupic.twitter.com/Q7JEXTqVVy

My Papa strongest Thankyou @TheRajKundra for being the Bestest papa in the world. Happy Father's Day . pic.twitter.com/vfKouUqsJM


Papa you are the best father in the world Thank you Love you #happyfathersday to all :)

Shraddha Kapoor and her father Shakti Kapoor featured in a goofy photograph:


He is just the best. Happy fathers Day Baapu

Actress Zareen Khan had a special message for 'single moms':

Happy Father's Day , Mommy ! And wishing the same to all the single moms who've been the best dad to their kids. Salute to u for doing the job of both the parents , single-handedly ! #HappyFathersDayMom

Neha Dhupia thanked her father for inspiring her "to live fearlessly":


U taught me how to love unconditionally ... to smile through the hardest times ... To live fearlessly .... This ones to the coolest and warmest dad in the whole wide world ... I love u so much pa ... #happyfathersday

This is what Salman Khan's sister Arpita Khan Sharma posted on Instagram:

Varun Dhawan wished his filmmaker father David Dhawan with this picture on Instagram:


Happy Father's Day. Didn't want to put up a perfectly staged picture of me and my dad. This is us at home. I have the most understanding and cool dads in the world


Just had an epic #ChaiWithMom . Wished her a #HappyFathersDay . pic.twitter.com/B86FsT3zWc

Actor Randeep Hooda described the many roles his father plays in his life:


A very grateful #FathersDay to celebrate with my father.He is my friend,guide,strength,inspiration &a reality checkpic.twitter.com/QjRuWKPzOz

Don't know if there's Twitter in heaven but if there is, this tweet's4 my dad.. I Miss you everyday pappa..