Rishi Kapoor Shares Pic With Young Shilpa, Tabu. See It to Believe It 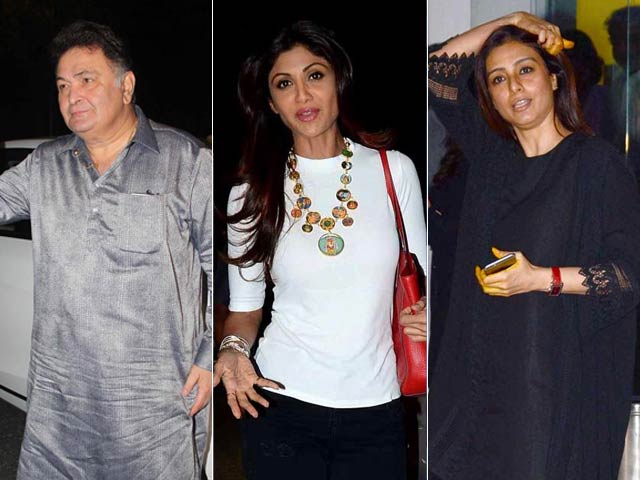 On Wednesday morning, Rishi Kapoor shared a picture featuring actresses Mamta Kulkarni, Shilpa Shetty and Tabu. It appears Mr Kapoor, also known as Chintu, has dug up this photograph from the depths of memory as he doesn't "even remember when this picture was taken"

Veteran actor Rishi Kapoor's Twitter posts always bring in an element of surprise. On Wednesday morning, he reaffirmed that with a picture he shared featuring former actress Mamta Kulkarni, Shilpa Shetty and Tabu, presumably from their initial days in Bollywood.
The stars, who have come a long way since then, 'actually' looked like this:

Don't even remember when this picture was taken.With teeny boppers Mamta,Shilpa,Tabu.They actually look like kids! pic.twitter.com/5uMnm0t5b4

It appears Mr Kapoor, also known as Chintu, has dug up this photograph from the depths of memory as he does not "even remember when this picture was taken."
This is how Shilpa reacted:

My God! Ha ha ha @chintskap this is hilarioushttps://t.co/gbn98a2Z9P

Within a short while, the Bobby actor, also shared an array of Tweets with pictures of magazine covers and pages, also featuring Neetu Singh, Jaya Bachchan, Sridevi, Mumtaz, Dilip Kumar, Amitabh Bachchan and Dharmendra, apart from himself:

Another old magazine cover. Thank you for sharing,whosoever sent it. Time for nostalgia! pic.twitter.com/bukINrzYLi

I wonder what the journo meant by that? Makes me sound like a "Tailor"(darzi) lol pic.twitter.com/2IEtWzOjKA

Rishi Kapoor has worked with Mamta only in 2005 movie Waqt Gawah Hai, while with Tabu, he has films like Pehla Pehla Pyar (1994), Saajan Ki Baahon Mein (1995) and Fanaa (2006). With Shilpa, he has not featured in a film so far.
Meanwhile, Mr Kapoor was last seen in All Is Well and his upcoming projects include Sanam Re and Kapoor And Sons. (Also Read: Rishi Kapoor is Having to Explain His Tweets Again)