Big B will reportedly portray a 102-old-father Dattaraya Vakharia, who is rather experimental with his ideas and still wants to explore new avenues in life while Mr Kapoor will be seen as his 75-year-old son Babu, who takes measured steps in life and is a sceptic 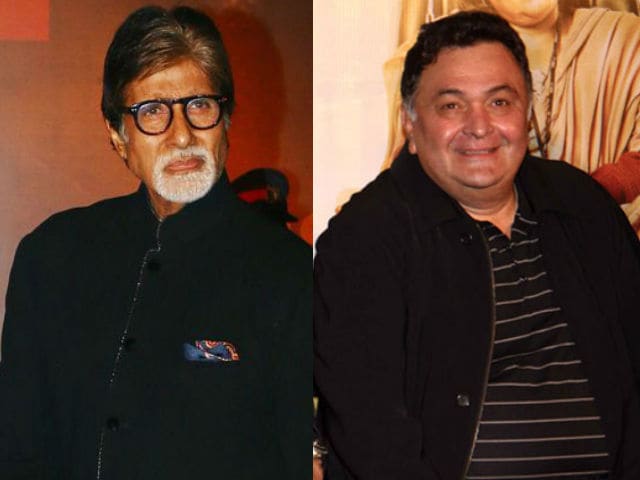 Rishi Kapoor has confirmed his collaboration with megastar Amitabh Bachchan in a tweet on Thursday and said that there was an 'instant' connection between the two on the sets of their new project after 26 years since the two were last seen together on screen. The new project is reported to be a film, titled 102 Not Out, according to Bollywood Hungama and features Big B and Rishi Kapoor as father-son duo. 1991's Ajooba, directed by Shashi Kapoor and Gennadiy Vasilev, was the last time they shared screen space together. Mr Kapoor and the 74-year-old actor have worked together in cult films like Amar Akbar Anthony, Kabhie Kabhie and Coolie, all of whom were directed by Manmohan Desai and turned out to be big hits.
On Twitter, Rishi Kapoor, who had made explosive confessions about being overshadowed by Amitabh Bachchan in the Seventies and Eighties, wrote: "Wonderful to work again with the Legendary Amitabh Bachchan. Thank you Amitji, it never felt (like) the 26 years old hiatus. We connected instantly."

Rishi Kapoor tweet reveals that he seems to have overcome certain upsetting emotions concerning his colleague Amitabh Bachchan, about whom he opened up in his biography. "To go back to Amitabh, I must confess there is still a lingering issue I have with Amitabh Bachchan. A big disadvantage of working in an all-star movie in those days was that everybody only wanted to make action films, which automatically meant that the star who could carry off action with the most flair would get the meatiest part. That's how, with the exception of Kabhi Kabhie, which was a romantic film, none of the multi-starrers I featured in had an author-backed role for me. Directors and writers unfailingly reserved their strongest, pivotal roles for Amitabh Bachchan. And it wasn't just me. Shashi Kapoor, Shatrughan Sinha, Dharmendra, Vinod Khanna faced it too," Mr Kapoor mentioned in Khullam Khulla.
Meanwhile, the Bollywood Hungama report also states that Big B and Mr Kapoor's new film will be directed by Umesh Shukla, who has previously helmed OMG Oh My God and worked with Mr Kapoor in All Is Well. The film, as the title suggests, will be based on Gujarati playwright Somya Joshi's work.
Meanwhile, Big B will reportedly portray a 102-old-father Dattaraya Vakharia, who is rather experimental with his ideas and still wants to explore new avenues in life while Mr Kapoor will be seen as his 75-year-old son Babu, who takes measured steps in life and is a sceptic. According to Bollywood Hungama, heavy prosthetics will be used for Big B's look as a 102-year-old in the film.
The Kapoor And Sons actor had informed fans and followers about a probable collaboration with Big B with a tweet earlier this month. That was when he had begun going through the script of the film. "Started reading the script with the team. For further details ,stay tuned," wrote Mr Kapoor.


Always a pleasure and an honour to work with him. Started reading the script with the team. For further details ,stay tuned!!! pic.twitter.com/ulxQCNUTIU

Meanwhile, Amitabh Bachchan is fresh from the release of Ram Gopal Varma's Sarkar 3 and is also working on Thugs Of Hindostan, the film with Aamir Khan. Rishi Kapoor was last seen in 2016 drama Kapoor And Sons, in which he played a 90-year-old grandfather.