Riteish Not 'Embarrassed' by His Films. Riaan Can Watch Them Anytime

"When I do films, I do it because it is important for me how I feel about films. I am sure, as an actor, there are some movies which he can watch two years from now and some after 18 years," said Riteish 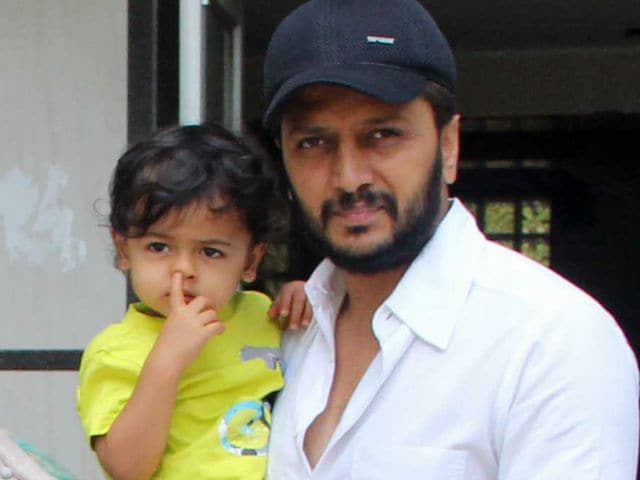 Riteish Deshmukh photographed with his son Riaan outside their Mumbai residence.

Riteish Deshmukh may have featured in many adult comedies, but the actor is not embarrassed about any of his work.
The 37-year-old actor has featured in adult comedies like the Kya Kool Hai Hum series and Masti series. When asked how his son Riaan, who is one-and-a-half years old, will react to his movies when he grows up, Riteish said, "When I do films, I do it because it is important for me how I feel about films. I am sure, as an actor, there are some movies which he can watch two years from now and some after 18 years."
"Let him watch them, if he likes them fine, if he doesn't that's also fine. I am not embarrassed about any of my work," he said.
Riteish was talking to reporters at the event to launch the trailer of Great Grand Masti.
Riteish said he has worked in several diverse movies, like Grand Masti, Marathi action film Lai Bhaari and the thriller Ek Villain.
On being asked if his adult comedies might make the actor's Marathi audience sad, Riteish said the viewers have been kind to him so far.
"As an actor I get an opportunity to do various films, adult and naughty comedy being one of them. I don't look down upon any genre. I am happy that Grand Masti was a successful film, that's the reason we are coming back with this. I am happy that Lai Bhaari was successful too. Audience has been very kind to me," he said.
Great Grand Masti is the third installment in the Masti franchise. The film also stars franchise regular Vivek Oberoi and Aftab Shivdasani.
The Housefull 3 actor said that though there may come a saturation point for him in doing adult comedies, newness in the subject can always make the work interesting.
"Of course there can be (a saturation point). The idea is, everyone does realize while doing a film that there could be a saturation point, but when you have something new to offer, there is new humour," he said.
The Indra Kumar-directed film, also starring Urvashi Rautela, is set to release on July 22.
(Except for the headline, this story has not been edited by NDTV staff and is published from a syndicated feed.)