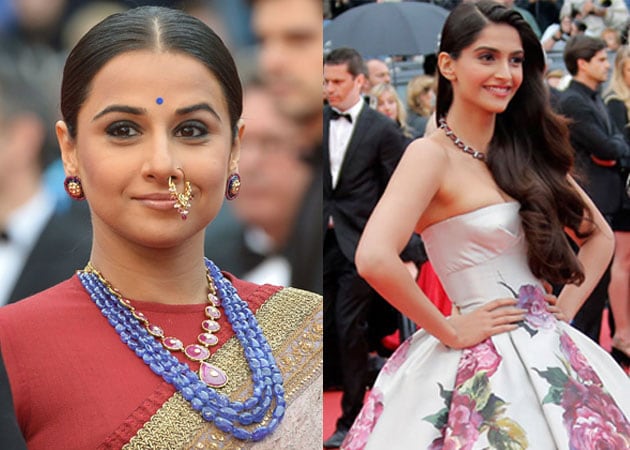 Vidya Balan and Sonam Kapoor may have received a mixed reaction for their red carpet appearances at the 66th Cannes International Film Festival but world renowned fashion designer Ritu Beri feels proud about their ensemble selections.

Bollywood actress Vidya Balan and Sonam Kapoor may have received a mixed reaction for their red carpet appearances at the 66th Cannes International Film Festival but world renowned fashion designer Ritu Beri feels proud about their ensemble selections.
She has hailed them for choosing an "Indian" look for the event.
Vidya made three appearances in traditional Indian costumes - a maroon lehenga, an ivory sari paired with a brown blouse and a light pink anarkali, for three different occasions on one day.
On the kick-off day, Sonam was spotted at the star-studded premiere of The Great Gatsby in an Anamika Khanna couture creation - an off-white sari teamed with a lattice work full-sleeve jacket. To add a zing to her look, she even wore a nose ring.
Later in the day, Sonam opted for a black lace lehanga by Mumbai based designer Shehla Khan at the film festival.
Beri says that choosing Indian apparel on international platform was definitely "not an over-do".
"Saris and lehengas have their own charm and represent India well. In fact, the Indian sensibility is being well acknowledged internationally. It makes me proud that Vidya Balan and Sonam Kapoor took the classic Indian look for the red carpet. They looked absolutely gorgeous," Beri told IANS.
She also said that the nose-ring donned by both the actresses, and the fact that Vidya covered her head with a veil added a "sassy vibe to the look".
"It definitely adds a fun edge to the look and where else are we going to going to bring this drama if not in Cannes," said Beri, who became the first Indian designer to present a show in Paris, where she successfully launched her first luxe collection in 1998.
Her gradual success also led her to be named by Time magazine among the People to Watch in International Business.