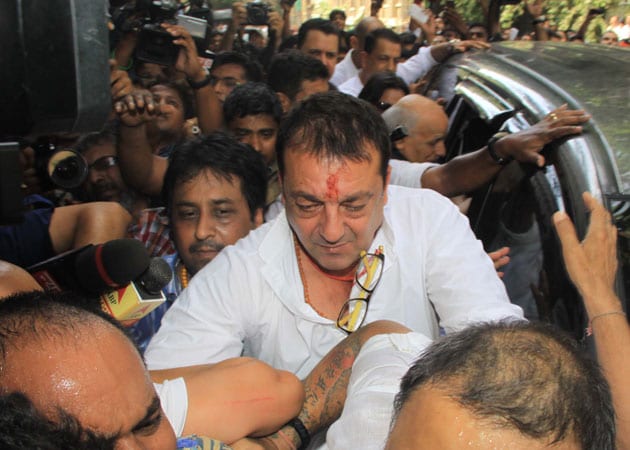 As chaos followed Sanjay Dutt on his way to the court, a member of the media was allegedly manhandled.

As mayhem ensued in front of Sanjay Dutt's Bandra residence, it was a test of patience for everyone present there.

As mayhem ensued in front of Sanjay Dutt's Bandra residence, it was a test of patience for everyone present there.
As Dutt, accompanied by his family, left home to surrender to the TADA court, chaos took over the bylanes of Pali Hill and the way ahead. While the media persons present along the way were leaving no stone unturned for taking photographs of the convicted actor, sources say producer Bunty Walia, who was also accompanying the star, flew into a rage and ended up allegedly slapping a journalist.
A source says, "Bunty, who was with Dutt on the way to the TADA Court, apparently hit a TV journalist and even tore off his clothes. Bunty's car was ahead of the channel's vehicle and there was a lot of media frenzy. The roads were blocked, as there was a fleet of cars following Dutt and the police force."
As the two cars almost bumped into each other, it allegedly sent Bunty hitting the roof with anger, post which the producer got out of his vehicle along with his bodyguard and engaged in a scuffle with the journalist.
An onlooker says, "The channel's car nearly collided with Bunty's car. The way was blocked when Dutt crossed the Worli Sea Link and was proceeding towards the court. There were press photographers everywhere and the scene was that of chaos. Bunty started abusing the journalist as well as the other car's driver. His body guards also tried to damage the car and even kicked on the bonnet."
The journalist, who was allegedly manhandled, on conditions of anonymity tells us, "Our car did not collide with Walia's car but since there was a traffic jam, all the cars were moving back-to-back. There was not even a scratch on his car. Our car simply stopped very close to his. He came out and started abusing me, then hit me and also tore off my clothes."
We also hear that post the incident, the reporter lodged an NC (non-cognizable offence) at the Worli police station. And according to buzz, the channel's car was left badly dented.
Walia chose not to answer our repeated calls and texts.