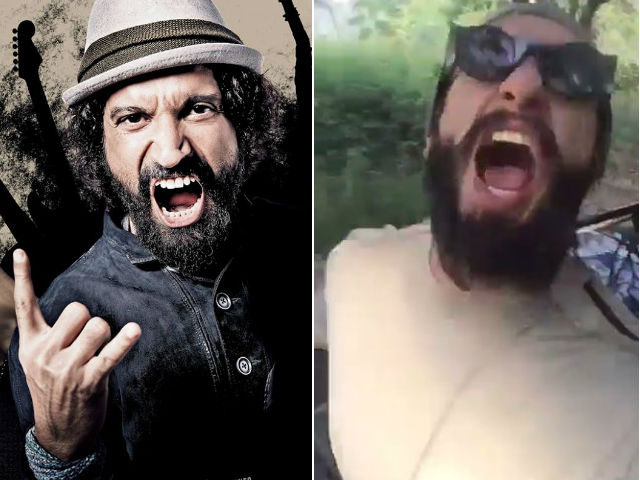 Farhan Akhtar (L) in Rock On 2. Ranveer Singh (R) in a still from the video posted on Twitter

It's time again to witness Bollywood PR at its fraternal best as Farhan Akhtar's Rock On 2 positions itself on the start line of the box office race. The film is all set to release on November 11. Bollywood actors, and Farhan's Dil Dhadakne Do co-stars Anil Kapoor and Ranveer Singh started the first round of promotions on Twitter.
Mr Kapoor brought the beats of Rock On's title track to the streets as he cycled around, dubsmashing:


Working out to my favourite song of all time! #RockOn2 .. 3 days to go!! @FarOutAkhtar@ShraddhaKapoor@Purab_Kohli@ritesh_sid@rampalarjunpic.twitter.com/MES6VImbln


Sir we love you.. the real rock star @AnilKapoor Jhakaaaaaaaaas I

The 31-year-old actor dubsmashed Farhan's song Pichle Saat Dino Mein from the film's predecessor Rock On!!, which released in 2008. It's like any other Ranveer Singh-gig, full of spunk:


Rock On Out in 4 days!!!!
#RockOn2@FarOutAkhtar@ShraddhaKapoor@rampalarjun@Purab_Kohli@ritesh_sidpic.twitter.com/VMtqd1Omva


Ratannnnnnnn..! Can't wait for you to see it.. big big hug.. #4daystogo#RockOn2https://t.co/TO9AGRBBmj

Arjun Rampal, who reprises his role from Rock On!! in the sequel, wants to co-star with Ranveer in the third film, should there be one:

Shraddha, who joins the Magik boys in the film, and Ritesh joined Ranveer's fan club:

Ranveer Singh will soon start filming Sanjay Leela Bhansali's Padmavati, in which he plays Alauddin Khilji. The film stars Deepika Padukone as the titular Padmavati and Shahid Kapoor her husband Ratan Singh.
Before that, Ranveer will be seen in this December's release, Befikre, opposite Vaani Kapoor. The film, primarily set in Paris and directed by Aditya Chopra, is a fresh take on romance. It releases on December 9.