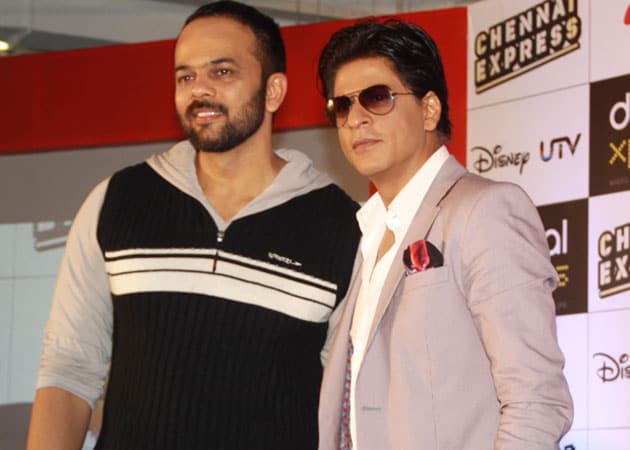 Director Rohit Shetty, whose last film Chennai Express was a blockbuster, says superstar Shah Rukh Khan is now like a family to him.

Director Rohit Shetty, whose last film Chennai Express was a blockbuster, says superstar Shah Rukh Khan is now like a family to him. Rohit teamed up with Shah Rukh for the first time in Chennai Express.
"No equations have changed for me after this film in the industry. It is just that I have made a great friend, a family member in Shah Rukh Khan," Rohit told PTI in an interview here.
His new found friendship with Shah Rukh is often a talking point in the tinseltown, because the director is also a good friend of noted actor Ajay Devgn. Since the time he started directing films, Ajay has been a regular feature in all his films, except for Chennai Express. With Singham 2, the Rohit-Ajay combination would be back for the ninth time, after their last outing with Bol Bachchan in 2012.
After Rohit finishes Singham 2, he will most likely make another film with Shah Rukh, which would again be a wholesome entertainer.
"We had a great time making Chennai Express, it was a learning experience working with Shah Rukh, it was a positive experience. We will do a film together. It will be that (masala entertainer) way only. We are just at planning stage at present, nothing is finalised. I can't say anything more as I don't know what the project will be like when it's complete," Rohit said.
While Rohit has made sequels of his two popular franchises Golmaal and Singham, he has no such plans for Chennai Express.
"At present there are no plans of sequel as the story is not like that. Chennai Express doesn't require it. But Shah Rukh Khan and I are definitely working together for a film," he said.
The duo is also planning to produce Marathi films. "It is at the planning stage. It is too early to talk about it. There are a few friends who have narrated scripts and they want me to produce Marathi films. I am looking forward to it. What kind of a film it will be, I can't say now," Rohit said.