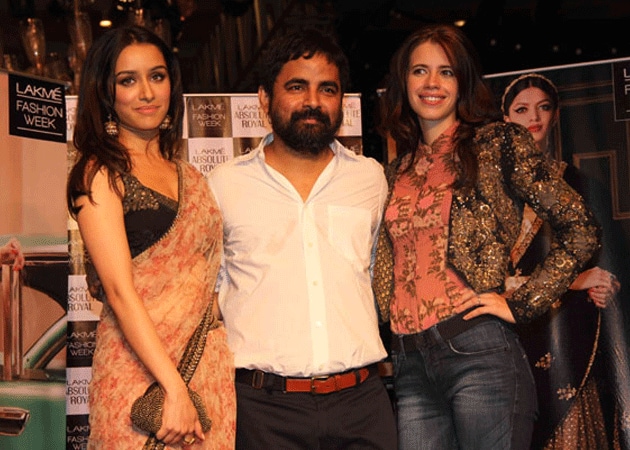 The grand finale of Lakme Fashion Week Winter/Festive season this year was a surprising affair as noted designer Sabyasachi Mukherjee presented a stunning Indian wear royal collection.
Sabyasachi's show brought the curtains down on the event this year.
Lakme puts out a collection that defines beauty and fashion statement for the season. This time it is 'Absolute Royal'.
The show had Sabyasachi's interpretation of Indian royalty and featured Lakme's Absolute Royal collection range and its two exquisite day and night looks.
His presentation was one of the season's most awaited shows, after a hiatus of five years.
The show began with a model singing a song as seven big chandeliers were lit and models sashayed down the runway.
The show was scheduled to begin at 10 P.M. but started at 11.15 P.M. and lasted half-an-hour.
Sticking to neutral tones of nude, ivory, white, beige and then moving on to red and black, the line-up featured quilted skirts, lehengas, saris, waistcoats, skirts, jackets, dresses, sherwanis and kurta churidars.
The girls teamed it up with heavy duppatas, glares, heavy jewellery and purses, while the boys wore turbans. Over 40 models walked the runway.
Last year, actress Kareena Kapoor had walked the ramp for Delhi-based designer Namrata Joshipura while the year before, she was the show-stopper for designers Kallol Datta and husband-wife duo Pankaj and Nidhi.
Though there was no show-stopper this time, celebrities like Nargis Fakhri, Kalki Koechlin, Sameera Reddy, Shraddha Kapoor, Jugal Hansraj and others made their presence felt at the grand finale.
The five-day fashion extravaganza had begun on August 23 with close to 89 designers presenting their collections at the venue for the event at a suburban five star hotel.
Well-known designers this season included Sabyasachi, Ritu Kumar, Manish Malhotra, Archana Kochhar, Anita Dongre, Rocky S, Vikram Phadnis, Rahul Mishra and others.