Originally directed by Mr Bhatt, Sadak clocked 25 years in December last year. The film is expected to track the story of Sanjay Dutt's character, who is on a venture to rescue his daughter 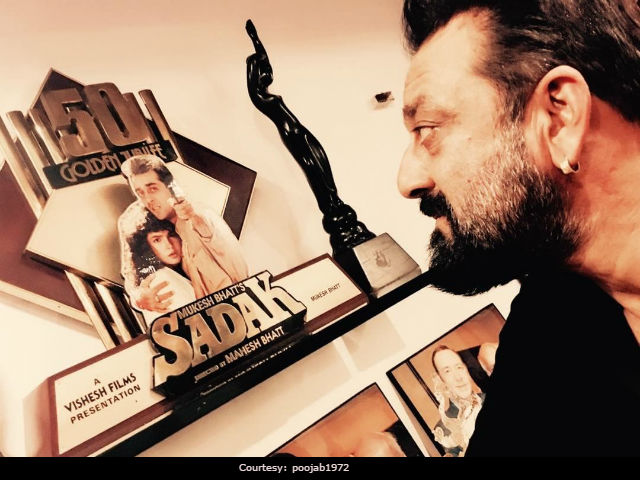 Pooja Bhatt has been hinting at a possible remake of the 1991 popular Bollywood film Sadak, co-starring Sanjay Dutt for a while now. And, Alia Bhatt will reportedly co-star with her sister Pooja and Mr Dutt in the remade version of Mahesh Bhatt's film, said DNA. According to the report in DNA, Alia has been cast in the role of Pooja and Mr Dutt's daughter in the film. Originally directed by Mr Bhatt, Sadak clocked 25 years in December last year. The film is expected to track the story of Sanjay Dutt's character, who is on a venture to rescue his daughter, reported DNA. The report in DNA also states that there will only be glimpses of Pooja's character through flashbacks in the film.
However, there has been no official confirmation from either the Bhatts or Sanjay Dutt himself. But Pooja Bhatt piqued our interests and got our hopes high about a probable remake with Instagram posts like these:


The Bhatt & the Dutt! Can one ask for more? #MaheshBhatt #SanjayDutt #Sadak #nostalgia #then #now #evergreen

Meanwhile, Alia Bhatt is fresh from the success of Badrinath ki Dulhania, which has made more than Rs 107 crores at the box office so far. Next, Alia will be seen in Imtiaz Ali's Dragon opposite Ranbir Kapoor.
Pooja Bhatt last acted in a film in 2001's Everybody Says I'm Fine! but has directed and produced several. Cabaret and Jism 2 are two of her films which she both helmed and was the producer of.
Meanwhile, Sanjay Dutt is all set to make a comeback with Bhoomi, which will be his first film after he completed a five-year jail sentence in relation to an arms possession case connected to the 1993 Bombay Blasts. Sanjay Dutt also has a film with Siddharth Anand and Rajkumar Hirani's Munnabhai 3 in the pipeline.