Sadhana, Fondly Remembered by Rishi Kapoor on Her Birth Anniversary

"Remembering Sadhanaji today on her birthday. Thank you for all the films and your style," Rishi tweeted alongside a black-and-white photograph of her 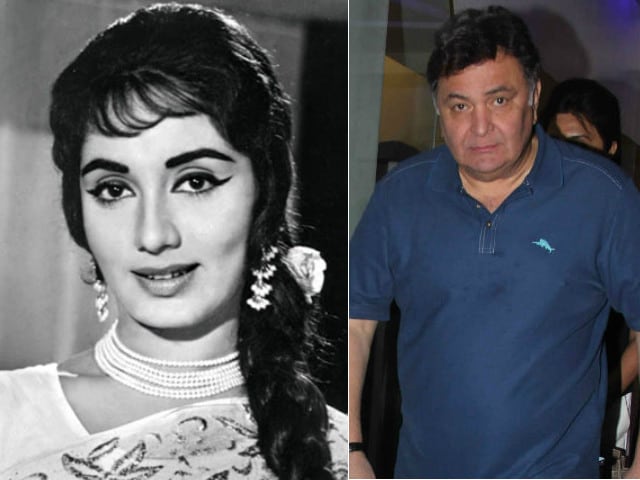 A file photo of Sadhana (L) and Rishi Kapoor photographed in Mumbai. (R)

On the 75th birth anniversary of Sadhana Shivdasani, veteran actor Rishi Kapoor has paid tribute to the veteran Bollywood actress by thanking her contribution to films.
Sadhana died on December 25, 2015, after a long battle with cancer.
Mr Kapoor tweeted on Friday:


Remembering Sadhana ji today on her Birthday! Thank you for all the films and your style! pic.twitter.com/qTEodQ38ZV

A top-rung Bollywood star of the 1960s and 1970s, Sadhana was born in Karachi, now in Pakistan. However, after partition, when she was barely seven, her family migrated to India and settled in Bombay (now Mumbai).
She made her debut as a child artiste in 1955 with a minor appearance in Raj Kapoor's film, Shree 420.
Later, in 1958, she acted in India's first Sindhi language film Abaana in a significant role, on a token payment of Re 1.
Sadhana is credited with introducing the famous 'fringe' haircut - known as her trademark 'Sadhana Cut' - and fitted churidar-kurtas as a much-copied fashion in Bollywood.
Paired with the top heroes of that era, Sadhana starred in notable films like Ek Musafir Ek Hasina, Asli Naqli ,Mere Mehboob - her first colour movie, Woh Kaun Thi, Rajkumar, Mera Saaya, Gaban, Ek Phool, Do Mali and many others till her voluntary retirement from Bollywood in 1994.
(Except for the headline, this story has not been edited by NDTV staff and is published from a syndicated feed.)