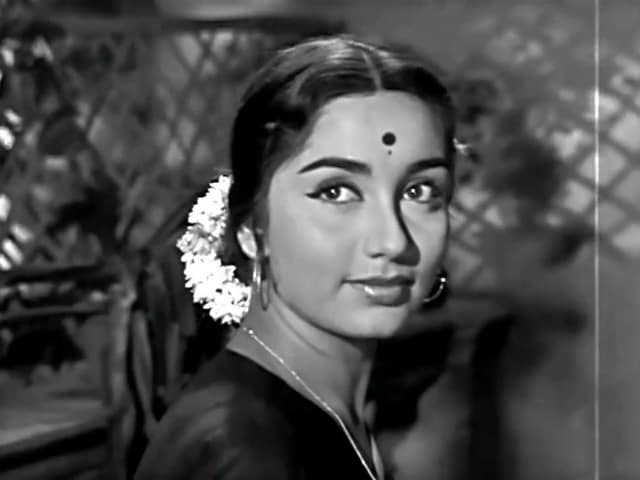 Sadhana in a still from Tera Mera Pyar Amar.

Veteran actress Sadhana Shivdasani, popularly known as Sadhana, died in Mumbai early morning on December 25. Born on September 2 in a Sindhi family in 1941, Sadhana is originally from Karachi in Pakistan and made her debut in showbiz with 1958 Sindhi movie Abana.
Sadhana's father, who named her after his favourite dancer Sadhana Bose, is brother of actor Hari Shivdasani. Sadhana, who was home-schooled by her mother for a long time, made her Bollywood debut as an actress with 1960 movie Love in Paris, co-starring Joy Mukherjee, with whom she also worked in Ek Musafir Ek Hasina. However, in 1955, she had featured in Raj Kapoor's Shree 420 as a chorus girl for the popular song Mur Mur Ke Na Dekh.
Sadhana went on to work for acclaimed director Bimal Roy for Parakh in 1961. She also co-starred with Dev Anand in movies like Asli-Naqli and Hum Dono.
She received her first Filmfare nomination as best actress with her performance in dual roles in the first part of filmmaker Raj Khosla's thriller trilogy Woh Kaun Thi?, co-starring Manoj Kumar. The rest of the movies in the trilogy - Mera Saaya (1966) and Anita (1967) - were also big hits and earned her the title: "Mystery Girl". She had featured in a double role opposite actor Sunil Dutt in Mera Saaya as well.
Composed by Madan Mohan and sung by Asha Bhosle, the song Jhumka Gira Re from movie Mera Saaya, which had Sadhana perform to Saroj Khan's choreography, became very popular during that time and continues to be a favourite of many.
Yash Chopra's 1965 blockbuster movie Waqt (1965) earned her another Filmfare nomination. Sadhana has also starred in movies like Intaquam (1969), Ek Phool Do Mali (1969), Aap Aaye Bahar Aaye (1971), Dil Daulat Duniya (1972) and turned director for Geeta Mera Naam (1974), in which she also had acted.
Apart from her contribution to Hindi films, Sadhana also became a style icon with her hairstyle, a fringe on the forehead, which gained popularity as the "Sadhana cut." She also introduced the concept of fitted salwar kameez, instead of the traditional loose cut, with her movie Waqt, which too was well accepted.
Sadhana was married to Love in Shimla director R K Nayyar for almost thirty years. She is survived by her foster daughter.
Sadhana, who did not score any awards during her eventful career, received the Lifetime Achievement Award from IIFA in 2002. (Also Read: RIP Sadhana Shivdasani. Her 'Legacy Will Live On', Tweets Bollywood)