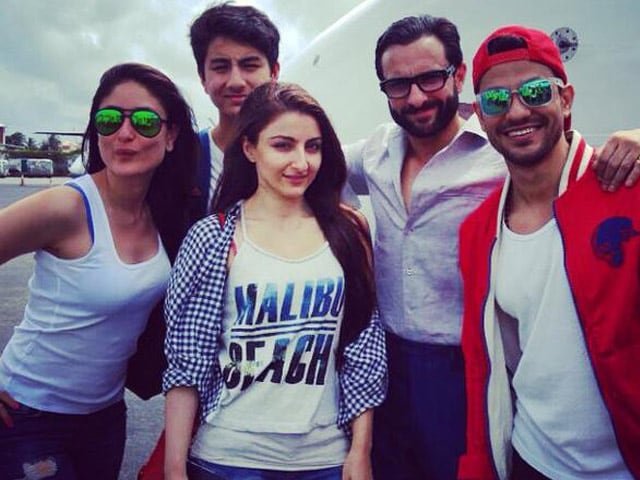 This image was posted on Twitter by Soha Ali Khan

"And we're off on a five day holiday to the Maldives," Soha Ali Khan posted on Twitter

Bollywood star couple Saif Ali Khan and Kareena Kapoor Khan is currently vacationing in Maldives with the actor's son Ibrahim, actress-sister Soha Ali Khan and her actor-husband Kunal Khemu.
The family is on a five-day visit to the island-nation. Soha took to microblogging site Twitter to share about the family holiday.


Touchdown in the Maldives! pic.twitter.com/YyTRLNPOsw

She had earlier tweeted:


And we re off on a five day holiday to the Maldives - thunderstorms predicted but praying for some spells of sunshine!

Three flights and a speedboat ride later, here we are - in one of the deepest atolls in the Indian Ocean!! Paradise.. pic.twitter.com/sXop5y78HK

Ibrahim, 14, is Saif's son from his first marriage to actress Amrita Singh. The two got divorced in 2004. The 44-year-old Omkara star married Kareena in 2012 after five years of dating.