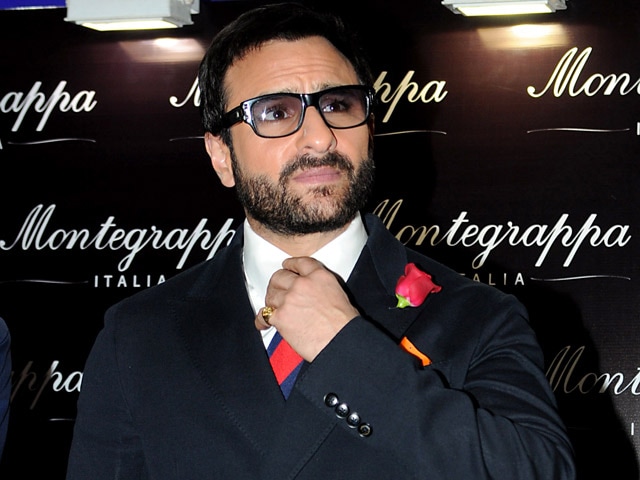 Saif Ali Khan was in Delhi and talked to NDTV about technology, films and more

Perhaps one of the most well-spoken stars in Bollywood, Saif Ali Khan, was in New Delhi for the launch of a mobile phone.
So are phones a bane or a boon?
"Both actually," the Nawab laughed. "You know my father used to say, when he had the phone, 'It's for me to make calls as and when I want to'. But these days you are perpetually on call," he said.
But with everyone sporting a smartphone these days, Saif said that it gets 'scary' when people just take pictures of you. "You do know. Sometimes, you aren't looking your best but there's one whipped out and 'Lo there's your mug."
"Kareena is obsessed with her phone, but I tend to monitor myself that I don't become a slave to it. On the sets it comes handy when you can play games," he added.
So does he read about himself?
"Yes, sometimes. I mean, come on, we have all Googled to see how we are faring haven't we?" he questioned.
Talking about his upcoming film, the actor said that Phantom, which is directed by Kabir Khan and co-stars actress Katrina Kaif, has shaped up well. But the one we were interested in was Vishal Bhardwaj's next with Shahid Kapoor.
"Yes, I am looking forward to it. I love Vishal's films, the way he characterizes his actors. I am really looking forward to it," said Saif, who has earlier worked with the director in Omkara.
It seems there's another Khan awaiting a Bollywood debut - his daughter Sara. "Yes, she wants to join films, but currently she is at Columbia and doing very well and I want her to focus on her studies," said Saif, who also has a son, Ibrahim, with his first wife, actress Amrita Singh. "Look at Soha (his sister). She has a degree from London School of Economics and she is now into movies. I think the girls in my family think this (Bollywood) is far more fun. Yes, perhaps it is," he added with a laugh.
Talking about 'Love Jihad', the actor said that he and Kareena had got married under the Special Marriage Act. "No one converts and even if they did, why should it be a problem really? God knows who somewhere gets offended and starts a chain reaction," he said.
With the current 'ban politics ', the actor said the government has been great for the Indian economy but added, "They have a task ahead in dealing with certain sections, who seem to be taking the role of moral guardians. That's what I await to see."
When asked if he had any political ambitions what-so-ever, Saif was emphatic. "None at all. I leave it to the ones who enjoy it," he replied.
Talking about the latest buzz in B-town about the release of Avengers: Age of Ultron, the Nawab said that his favourite superhero is Iron Man, played by Hollywood star Robert Downey Jr.
Well, here's wishing Saif a safe 2015 at the box office since 2014 didn't exactly have a Happy Ending. Watch: