Actor Saif Ali Khan is not really upset with the leak of his son Taimur's pictures. "That the part of Internet where there's no secrecy or privacy" 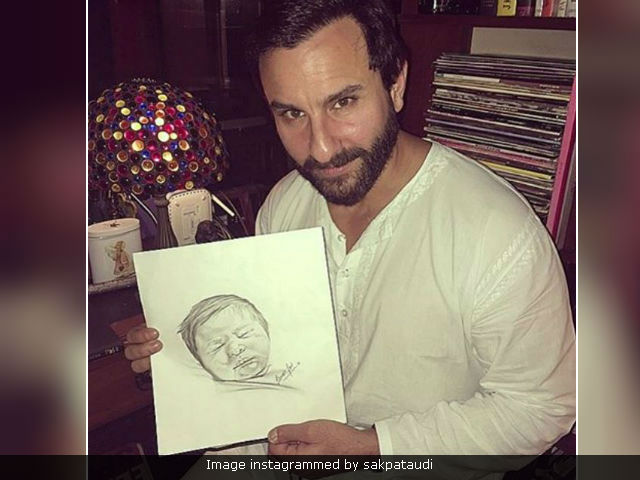 Actor Saif Ali Khan is very protective about his two-month-old son Taimur Ali Khan Pataudi - but resigned about the Insta-fame that social media brings to star children, and has already brought to Taimur, who was born in December 2016. Last month, a picture of Taimur that Saif has as his display photo on WhatsApp was accessed and circulated online. The Internet went instantly into a meltdown but Saif isn't fretting. The 46-year-old actor told NDTV: "That's okay. That the part of Internet where there's no secrecy or privacy. And you know, I don't know, maybe there shouldn't be." Saif Ali Khan is married to actress Kareena Kapoor, 36, and Taimur is the couple's first child together.
This is the picture of Taimur Ali Khan which went viral:

Photos ostensibly of Kareena and baby Taimur in hospital went viral earlier. Saif and Kareena were also targeted online for their choice of name which, Twitter alleged, seemed similar to Mongol invader Timur or Tamarlane. Of the controversy regarding Taimur's name, Saif told NDTV: "I just really liked the name. I didn't give any massive thought to any historical significance. I don't want to keep defending my choice again and again. I'd be quite happy to leave the kid out of it."
Watch: Saif Ali Khan on son Taimur
Kareena Kapoor discussed raising her son in the digital age in an earlier interview with news agency PTI. "It is tough in today's times with social media. But it is the environment that he will be brought up in and we are going to teach him exactly what we believe in," she said. Kareena is pretty clear as to how she wants to raise her son: "I want to look at it like he is going to get the best of his parents. I was born in a famous film family and so was Saif, yet we are very grounded. The advice I will give to my child is to have his head down, be humble, do what he wants to do and ignore everything else," she told PTI. Neither Saif Ali Khan nor Kareena Kapoor are officially on social media.
Saif Ali Khan features in this Friday's Rangoon, co-starring Kangana Ranaut and Shahid Kapoor. The film is directed by Vishal Bhardwaj. Kareena will soon start filming Veere Di Wedding, co-starring Sonam Kapoor and Swara Bhaskar.
(With PTI inputs)