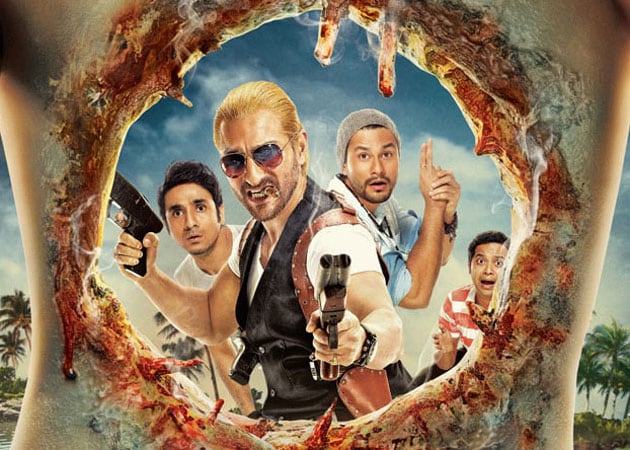 Director duo Raj Nidimoru and Krishna D K, who are looking forward to the release of their zombie film Go Goa Gone, think that having an established actor like Saif Ali Khan will help them reach a wider audience.

Director duo Raj Nidimoru and Krishna D K, who are looking forward to the release of their zombie film Go Goa Gone, think that having an established actor like Saif Ali Khan will help them reach a wider audience.
Go Goa Gone is being promoted as India's first zomcom film and will see Saif as a Russian mafia don, who is also a zombie-hunter.
"By having a superstar in our film we primarily wanted to reach out to more people. Somebody who is not well acquainted with the Bollywood film industry will come to watch the film because of Saif. But the film also depends on its and not only on its cast," the director duo told PTI in an interview here.
"For this film, we felt we wanted a superstar. I think a superstar initially helps in bringing audience to theatres for a film like this," he said. Saif's new look in the film has taken many by surprise.
The actor is seen in an all-blonde look, beefed up, got tattoos painted on his body and learnt to speak Russian language.
"He is a Russian mafia who arranges rave party. So Saif has been given that kind of look...beefed up, blonde look, tattoos, etc. To try this look, the credit goes to Saif as he had the guts to do something that is radically different," the duo said.
The Nawab of Pataudi was the first and only choice for the director duo.
Co-produced by Saif Ali Khan, Go Goa Gone is a story about two friends played by Kunal Khemu and Vir Das, who travel to Goa with another friend Anand Tiwari.
When the trailer of the film was launched online, it got over two million hits and both the directors are quite happy about it.
"When we launched the trailer, we were anxious as the concept is new. Our friends have liked it but we were waiting for the reaction of others. But we are now really happy looking at the response. It is very encouraging," the duo said.
"The first half of the film is comedy. There is an edge in the film and that is brought by the zombies. To enjoy the film one shouldn't necessarily know about zombies. It is a kind of movie that will be enjoyed by all," they added.