Saira Banu: Dilip Kumar's biography will be out in early 2014 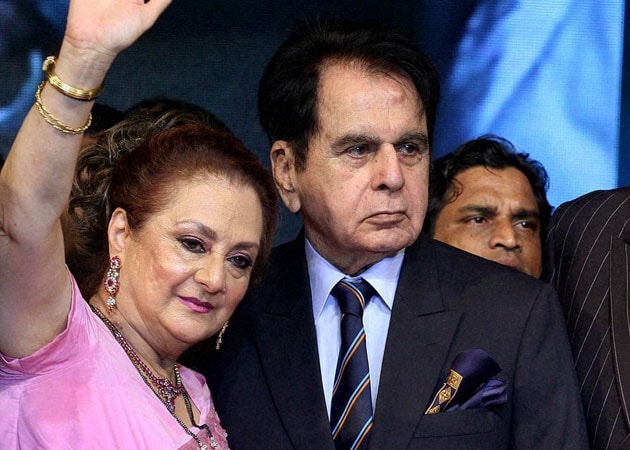 Dilip Kumar's biography, which was earlier scheduled to be released on his 91st birthday, will now come out early next year, said his wife and yesteryear actress Saira Banu.

Bollywood thespian Dilip Kumar's biography, which was earlier scheduled to be released on his 91st birthday, will now come out early next year, said his wife and yesteryear actress Saira Banu.
The biography, written by author Uday Tara Nayar, who is also a close family friend of the Bollywood thespian, is ready. It is likely to be released in January or in the beginning of February 2014.
Dilip Kumar turned 91 on Wednesday (December 11, 2013).
Ms Banu said they planned to release the book on 11.12.13, a special date, but could not do so because of the legend's weak health.
"Actually, we were planning to launch Dilip saab's biography today (Wednesday) and everybody said that it is a very special date, but unfortunately, we could not as he fell ill," she said.
"Now, Inshallah, we will launch the biography in January end or in the beginning of February next year," she added.
The two-part book focuses on the actor's nine-decade long journey, his love story with Saira Banu, some untold stories as well as rare pictures of the thespian and his family members.
In the past, three books on Dilip Kumar by Vinita Lamba, Sanjit Nawrekar and Lord Meghnad Desai were published.
Dilip Kumar had a quiet celebration on his 91st birthday with close friends, family and his team of doctors. Saira said they chose for quiet celebration because of his health.
However, she has plans for a grand party for the film fraternity at the launch of thespian's biography.
"We have celebrated this birthday quietly with close friends, family and a team of doctors because we don't want to put much strain on him," Saira, who has worked with Dilip Kumar in films like Gopi and Sagina, said.
"If you (reporters) remember two years back we had a grand celebration of his birthday. Everyone came and spent time with him. So, Inshallah, we will invite all the industry people at the book launch," she added.
One of the best performers on the Indian silver screen, Dilip Kumar in his six decades' career worked in much appreciated films like Jwar Bhata, Mela, Naya Daur, Devdas, Madhumati and Mughal-E-Azam.