"Salman Khan not once interfered in the choice or asked to remove any singer. He only refused to meet Arijit. His wish," tweeted actor Nikhil Dwivedi 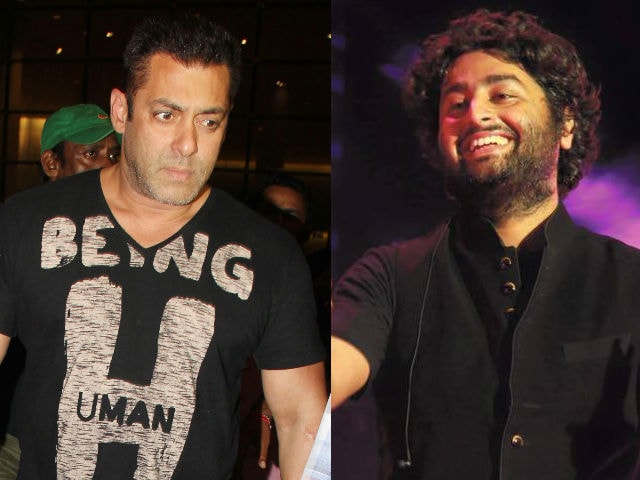 First, singer Arijit Singh posted and then deleted a dramatic Facebook note to Salman Khan begging that his song be retained in new film Sultan. Now, actor Nikhil Dwivedi has tweeted a defence of Mr Khan, saying the 50-year-old star is not to be blamed for the song being dropped.
The tweet says that Salman Khan did not get the producers of Sultan - Yash Raj Films - to delete Arijit Singh's song but that it was true the actor refused to meet the singer.


I m privy &Salman nt once interfered in d choice or askd 2remove any singer. He only refused 2meet Arijit. His wish! https://t.co/OIhviVTerI

Nikhil Dwivedi is known to be close to Salman Khan. His tweet appears to have been corroborated by a Mid-Day report which quotes a source as saying: "Salman isn't petty. Why would he ask for a song to be removed from the film when he had shot with the version recorded by Arijit? Music directors usually record a song with various artistes and the best one makes it to the album. So, in case of Sultan, it was purely producer Aditya Chopra's and Vishal-Shekhar's call."
On Tuesday, Arijit Singh posted a lengthy Facebook note addressed to Mr Khan apologising for having insulted him and pleading in favour of his Sultan song. Details of when and where he insulted the actor are still unclear but reports suggest that it happened at an award show three-odd years ago.
Mr Singh, known for his work in films like Aashiqui 2 and Dilwale, has not sung for Mr Khan so far and Mid-Day's source says he 'pestered' the actor after learning he would sing for Sultan: "From the time he got to know that he would sing for Salman, he has been pestering him so that he could settle an old matter. All Salman did was turn down his request. He didn't get any of his songs removed. Arijit is clearly mistaken."
When Mid-Day contacted Mr Singh for a comment, he said, "I am really upset. Can I connect later?"
Arijit Singh deleted the Facebook apology later but a subsequent post is still online:

Several users on Facebook and Twitter have said there was no need for the singer to publicly apologise or beg.
Salman Khan has not commented.
Here's the text of Arijit Singh's now-deleted Facebook apology:
"Dear Mr Salman Khan
This is the last way I thought I would speak to you. I have been trying to text you call you and do everything possible to tell you that you are mistaken about the fact that I insulted you. I never did. That night in the show. It was the wrong time and wrong aura. Nevertheless you felt insulted.
And I understood and I felt extremely sorry about it as me and my family have been your fan since long. I tried to explain so many times but you never got it. I apologized but you never got it. How many times I sent you apology texts you also know.
At Nita Ji's place I only came back to apologize to you but you dint get it.
No problem I apologize here In front of everyone but please it is a request.
Please do not remove the song that I sang for you in Sultan. You want anyone else to sing this song, absolutely fine but keep a version at least. I have sung enough songs sir. But I want to retire with at least one song of you keeping in my library. Please do not take away this feeling.
I don't know why am I doing this I know the consequences People are going to write their heart and mind and everything. I also know you won't be bothered Mr Salman Khan.
Still I think I need to take it out. After all I have to live with this fact that you made sure that I don't sing for you even though so many of us requested.
But I will be a fan bhaijaan..
Jagg ghumeya thare jaisa na koi..
Regards
Yours truly
Arijit Singh
Let there be light"
Mr Singh made his debut as a singer in Bollywood with Phir Mohabbat from Murder 2 and has also sang for movies like Aashiqui 2, Dilwale, Airlift and Tamasha.
Salman Khan was last seen in 2015's Prem Ratan Dhan Payo and stars as a Haryanvi wrestler in Sultan which also features Anushka Sharma. Sultan releases on Eid this year.