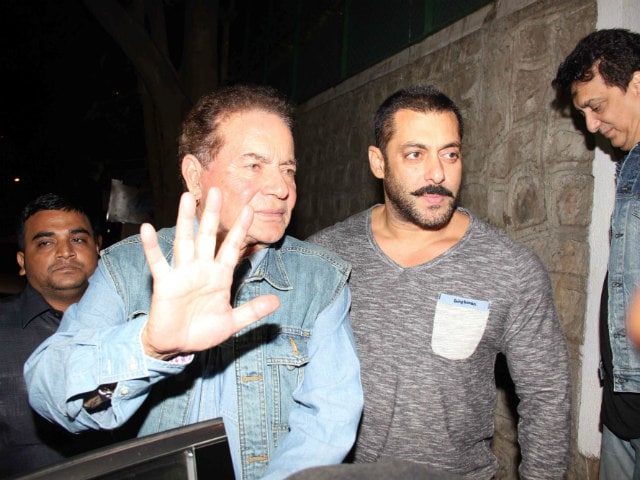 The Khan-daan celebrated yet another birthday with Salman Khan's father, filmmaker Salim Khan blowing out candles on his birthday cake on Thursday. Mr Khan is now 81. Salman, who makes his presence on Twitter felt very rarely of late, shared old pictures of his father on his birthday along with a wish. Salim Khan's superstar son is also set to celebrate his 51st birthday on December 27. Salim Khan, who began as an actor and then switched to writing, is one half of celebrated screenwriter duo Salim-Javed. Javed Akhtar and Salim Khan met while working on Sarhadi Lootera, which was also Mr Khan's last movie as an actor. Meanwhile, Salman Khan is busy shooting for his next film with Kabir Khan Tubelight.
Happy birthday, Salim Khan. Salman helps you take a trip down memory lane:

This is what Salman's brother, actor-filmmaker Arbaaz Khan, shared on Instagram:

The veteran screenwriter joined Twitter earlier in March this year. He made his debut on Twitter with the moniker 'luvsalimkhan' on March 29.
This is how Salman welcomed his father:

Salim Khan, who was 'discovered' at the wedding of producer Tarachand Barjatya's son decades ago, debuted in 1960 film Baraat. He then appeared in minor roles, notably in Shammi Kapoor's 1966 film Teesri Manzil. Salim Khan and Javed Akhtar met on the sets of Sarhadi Lootera, in which Mr Khan had a role and Mr Akhtar served first as clapper boy and then as dialogue writer. Together, they became Salim-Javed, writing superhit films like Sholay, Seeta Aur Geeta, Don, Deewar and Mr India, the last of which was filmed after Salim-Javed parted ways.
Films that Salim Khan wrote solo include Patthar Ke Phool and Pyar Kiya Toh Darna Kya, both starring Salman and produced by other son Sohail Khan.
Salim Khan has two wives, Susheela Charak and dancer-actress Helen. He has three sons - Salman, Arbaaz and Sohail - and two daughters - Alvira and Arpita.
Salim Khan rejected the Padma Shri in 2014, saying he deserved the Padma Bhushan at the very least.
Salman Khan, meanwhile, was last seen in Sultan. His next film Tubelight releases in 2017.