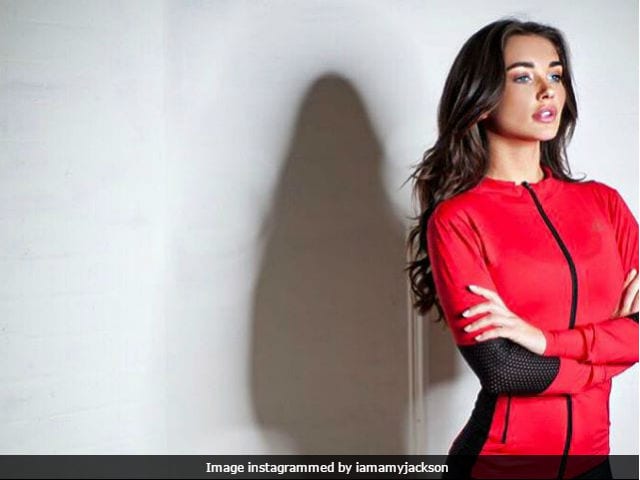 Amy Jackson is 'over the moon' to be a part of Salman Khan's Being Human Campaign. The 25-year-old actress was recently roped in as the brand ambassador of the 51-year-old actor's clothing line, Being Human. Amy Jackson posted a black and white picture from the shoot with Salman Khan on Instagram, captioned: "Over the moon to be a part of the new #BeingHuman Campaign with @beingsalmankhan Styled by @ashley_rebello || Makeup @jacobsadrian & hair @aasifahmedofficial(sic)." Amy Jackson is currently gearing up for the release of her film 2.0 co-starring superstar Rajinikanth and Akshay Kumar. The film is scheduled for release on October 18.
Check out Amy Jackson's picture with Salman Khan here:

Amy Jackson, a British model and actress, made her debut with filmmaker A L Vijay's 2010 Tamil film Madrasapattinam. She made her Bollywood debut with the 2012 movie Ekk Deewana Tha. The film, directed by Gautham Menon, featured actor turned politician Raj Babbar's son, Prateik. Amy Jackson was last seen in the 2015 movie Singh Is Bling opposite Akshay Kumar. The film, directed by Prabhu Deva, also featured Lara Dutta and Kay Kay Menon in pivotal roles.
Amy Jackson's next film 2.0 will see Rajinikanth reprise his role as Dr.Vaseegaran and Chitti. As per reports, the satellite rights to the film, which will be released in Tamil, Telugu and Hindi simultaneously, have been sold to Zee Network for Rs 110 crore.
Meanwhile, Salman Khan, who was last seen in the 2016 film Sultan, will next feature in Kabir Khan's Tubelight co-starring Sohail Khan and Chinese actress Zhu Zhu. He will also reprise the role of Tiger in Ek Tha Tiger's sequel, Tiger Zinda Hai opposite Katrina Kaif.