Salman Khan And Nephew Ahil Are Picture Perfect Together

Salman Khan, who is currently busy with his DaBangg world tour, took out time to bond with his little nephew Ahil in Hong Kong. The 51-year-old actor's sister shared their adorable picture on social media and its going viral 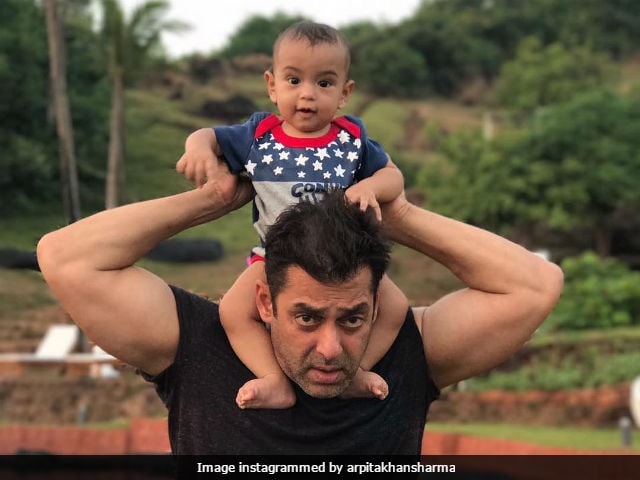 Salman Khan will next be seen in Tubelight (Image courtesy: Arpita Khan Sharma)

Salman Khan's sister Arpita shared an adorable picture of the 51-year-old actor with her son, Ahil on Instagram. The Kick actor, who is currently busy with his DaBangg world tour, took out time to bond with his little nephew. In the heartwarming picture, Salman Khan can be seen carrying his one-year-old nephew in a carrier. Arpita, Aayush Sharma and Sohail Khan are accompanying the Hum Saath-Saath Hain actor on the tour, which is next scheduled to happen in Auckland. Before his performance in Hong Kong, Salman Khan had shared glimpse of the dance rehearsals with his fans on social media.
See the lovely pictures shared by Arpita Khan Sharma below:


Rehearsals for the 1st show in Hongkong tomo! #DaBangHK

Sonakshi Sinha, Bipasha Basu, Daisy Shah, Prabhudeva and Manish Paul are a part of Salman Khan's Dabbang tour. After Hong Kong and Auckland, the tour is scheduled to take place in Melborne and Sydney.
Salman Khan is currently shooting Kabir Khan's Tiger Zinda Hai co-starring Katrina Kaif. The film, which is a sequel of 2012 movie Ek Tha Tiger, will see Salman reprise the role of Tiger, an Indian spy (RAW). The film marks the Bodyguard actor's fourth collaboration with Kabir Khan. The duo have previously worked together in films such as - Bajrangi Bhaijaan, Ek Tha Tiger and Tubelight, the shoot schedule of which was completed in February.
Salman Khan shared the first poster of his upcoming film Tubelight on Wednesday.