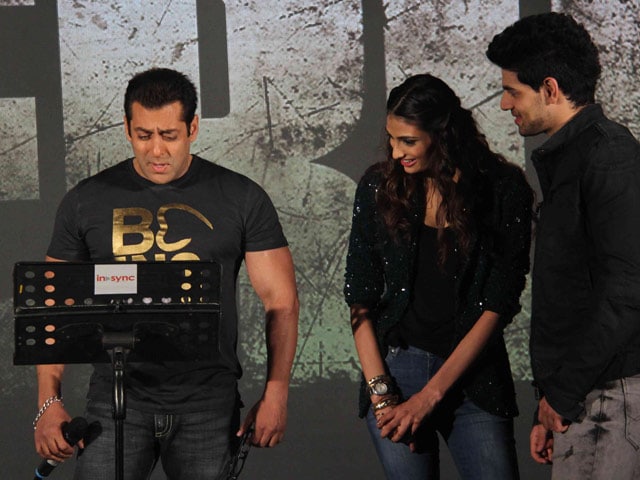 Salman, Athiya and Sooraj at an event in Mumbai.

Athiya Shetty made her Bollywood debut opposite Sooraj Pancholi in Hero, which was co-produced by Salman Khan. Of her mentor, Athiya, who is the daughter of actor Suniel Shetty, said: "He is not our teacher or a preacher. But he is our boss and a very cool and good looking boss". Hero is the remake of Subhash Ghai's 1983 film

Actor Suniel Shetty's daughter Athiya, who made her Bollywood debut with Salman Khan's co-production venture Hero, finds the superstar "a very cool and good looking boss".
"He is not our teacher or a preacher. But he is our boss and a very cool and good looking boss," Athiya told IANS.
Directed by Nikhil Advani, Hero, which released on September 11, is a remake of Subhash Ghai's 1983 hit film of the same name. (Also Read: A 'Thank You' From Salman For 'Compliments on Sooraj and Athiya')
Athiya starred opposite actor Aditya Pancholi's son Sooraj in the film.
Athiya said that she feels acting can never be learned in a confined space of a film school, but on the sets and being in action. "We did workshop before our film started for three months to get a better sense of our characters, script, scenes and worked a lot on that. But I feel that you don't need to go to a school to understand the craft as you learn with each film," said Athiya, who went to a film school in New York. (Also Read: Why Athiya Shetty Kept Her Passion for Acting a Secret From Her Father)