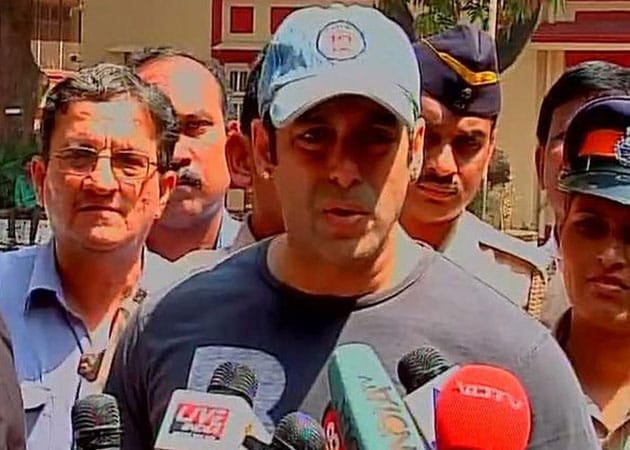 "Just as we select our girlfriend, you should select your leader in the same manner," said the Kick star, currently believed to be single and girlfriend-less."

Bollywood actor Salman Khan today strongly urged Mumbaikars to go out and vote, and he did so in typically Salman fashion.

"Just as we select our girlfriend, you should select your leader in the same manner," said the Kick star, currently believed to be single and girlfriend-less. The 48-year-old actor spoke to the press after casting his vote today in the Maharashtra assembly elections. (Pics: In Maharashtra and Haryana, Celebs and Political Big-Wigs Vote)

He also said, on a more serious note, "When you vote, it shows that somewhere or the other you love your constituency, city, state and country. Elect someone who will do more social work in your constituency than merely play politics. The change has to come rapidly and start within us, if we only don't vote or are bribed or don't come down for our buildings, then how will the change happen. People out on picnics right now, enjoying this day as a holiday are the ones who complain later on."

Salman called for citizens to look inwards, saying, "Every country in the world has issues. The biggest issue we have is that we have a weak national character. We take our country for granted. We have no respect for women, no one wants to work. we need to give ourselves a boost. People want policies, they don't want to work hard or study, we need to change ourselves then only we will elect the right people for our nation."

Salman also said, "Elder citizens have participated because they care what will happen to the next generation after them."

The Congress-ruled Maharashtra has seen brisk voting today, with a 33% voter turnout by the afternoon. In Mumbai, many of Salman Khan's Bollywood colleagues were spotted at polling booths, among them Abhishek Bachchan and Ranbir Kapoor.