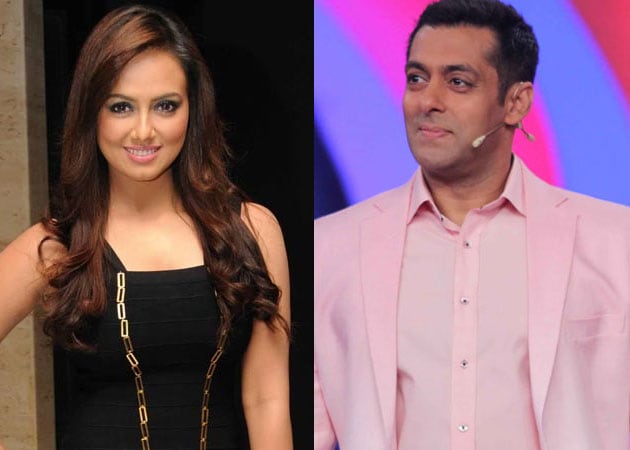 Bollywood star Salman Khan has stepped in to support actress Sana Khan, who is reportedly in hiding after getting embroiled in a controversy surrounding an alleged kidnapping of a 15-year-old girl.

Bollywood star Salman Khan has stepped in to support actress Sana Khan, who is reportedly in hiding after getting embroiled in a controversy surrounding an alleged kidnapping of a 15-year-old girl.
Sana has a role in Salman-starrer Mental, and she had even participated in reality show Bigg Boss 6, which was hosted by Salman.
News of the actress' involvement in the kidnapping of a minor girl emerged Friday. According to reports, she has been declared absconding after she was charged with alleged attempted abduction of the girl, who reportedly rejected a marriage proposal by Sana's cousin Naved Khan.
In this scenario, Salman took to Twitter after over 20 days of staying away from micro-blogging website, to speak up for Sana.
"Poor sana, so sad. First let her become famous, then try and get some publicity from her. This is the problem - chappo anything galat bhi ho toh (print anything even if it is wrong)," he posted on Twitter.
Questioning the situation, he added: "Why would a girl kidnap a 15-year-old? For money? To get her married, at 4 p.m. in a populated area? Investigate the complainants. Kamaal hai yaar (It's amazing)."
Showing his concern towards Sana, he then tweeted: "Obviously must be scared and running around and hiding. They (police) have an arrest warrant on her, 5 dharas, jail is not Big Boss house dude. SAD."
He believes Sana has been framed in the controversy.
"Obviously those people must have some ulterior motives. Worked with her on Bigg Boss, you have seen her for three months every day. What do you think," he added.
IANS tried to get in touch with Sana through her spokesperson Ismail Sheikh, but he didn't respond.