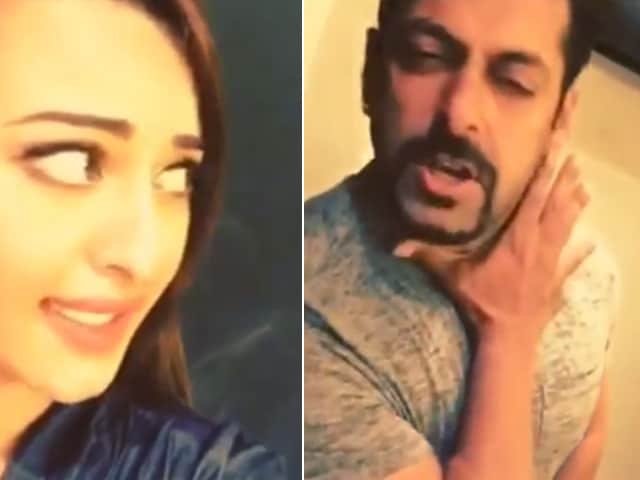 A still from the Dubsmash video. (Image courtesy: Salman Khan)

Dabangg co-stars Salman Khan and Sonakshi Sinha just won the dubsmash craze that's been spreading through Bollywood - not with one of their several dubsmash-worthy dialogues as Chulbul Pandey and Rajjo but one made famous by Sonakshi's actor-father Shatrughan Sinha in Mere Apne.
The original scene featured Shatrughan Sinha bursting in upon Mala Sinha to demand "Shyam kahan hai?" In the dubsmash version, Salman takes Mr Sinha's role and lip-syncs to, "Aaye to kehna Chhenu aaya tha, in perfect Shotgun style (with a dash of Chulbul Pandey added), while Sonakshi mouths Mala Sinha's line. Salman Khan instagrammed the dubsmash link and captioned it:


Found one of dads dialogues this is too cool!!!!! A #dubsmash a day, keeps the boredom away... And you entertained #badass #shotgun #mereapne #chhenu #dialoguebaazi #crazy #fun

We prefer the one with Salman (obviously).
Recently, Sonakshi also dubsmashed her Lingaa co-star Rajinikanth's lines, a task in which she says she was egged on by director AR Murugadoss on the sets of Akira:

Other Bollywood celebs to have been infected by the dubsmash virus are Ranveer Singh, Priyanka Chopra, Alia Bhatt and Jacqueline Fernandez.