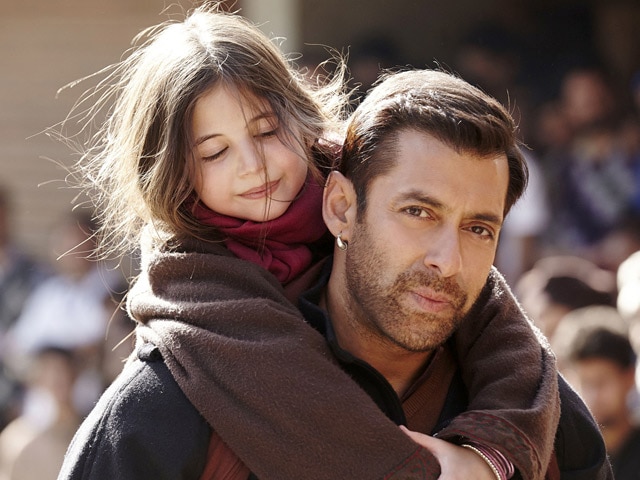 It's been a singularly happy Eid for actor Salman Khan whose new film Bajrangi Bhaijaan has made its 100 crores in its opening weekend.
In fact, the film has already collected a little over the benchmark figure in box office receipts. Bajrangi Bhaijaan released on July 17, the beginning of the Eid weekend which has traditionally been reserved for Salman on the Bollywood calendar.
Trade analyst Komal Nahta tweeted:

Bajrangi Bhaijaan trails in the wake of in the blockbuster takings of the multi-lingual Baahubali - Rs 300 crores so far - which spent a week in theatres before Salman's film arrived. However, Bajrangi Bhaijaan has broken the other Khans' record, making its 100 crores quicker than Aamir's PK and Shah Rukh's Happy New Year, both of which stopped just short of the finish line in weekend one. PK is currently Bollywood's biggest earner at home and abroad. Salman's biggest film so far has been 2014's Kick which made Rs 231.85 crores.
Salman is also the actor with the most 100 crores films to his name. Bajrangi Bhaijaan is blockbuster #8, a number unsurpassed by any other actor. Trade Analyst Taran Adarsh tweeted:

Poised to break more records, Bajrangi Bhaijaan is this year's biggest Bollywood film, outstripping films like Tanu Weds Manu Returns and ABCD 2.
The film reunites Salman, 49, with three previous collaborators - director Kabir Khan and co-stars Kareena Kapoor and Nawazuddin Siddiqui - all of whom have delivered blockbusters with the actor before in Ek That Tiger, Bodyguard and Kick.
Bajrangi Bhaijaan, which features a Salman of greater gravitas and fewer words than the one-liner spouting shirt-ripping Chulbul Pandey of Dabangg, deals with the tale of a Hanuman bhakt who embarks on a mission to see a little speech-impaired girl safely home to Pakistan. Salman, who is also about to appeal in the High Court against the five-year sentence he was given in a hit-and-run case, has booked both Eid and Diwali this year. Prem Ratan Dhan Payo, directed by Sooraj Barjatya and co-starring Sonam Kapoor, releases in November.