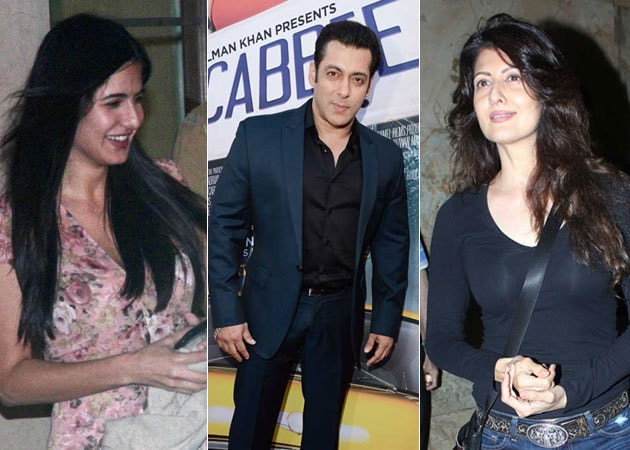 The actor was recently in Toronto for the music launch of Dr Cabbie starring Katrina's sister Isabele Kaif. While it can be seen as a professional step, since Salman has co-produced the film, however, there is no doubt that he would have done it in any case on Katrina's request. Further the actor was instrumental in pulling Katrina out of a thick spot with the costume and make-up artists association recently. (In pics: Salman's Trip to Toronto With the Cabbies)

Salman Khan's ex flame, Sangeeta Bijlani, too has a curious role to play in his life till now. The former actress is reportedly a part of the upcoming season of celebrity TV game show Bigg Boss, which will be hosted by Salman.(Also Read: Sangeeta Bijlani in Bigg Boss 8?)

After the seventh season of the show, Salman had hinted that he may not return for the next season. In the seventh season of Bigg Boss, the actor had faced flak for coming out in support of participants Tanishaa Mukerji and Arman Kohli. However, Sangeeta's presence may have been a contributing factor for this change in his decision. Sangeeta and Salman were engaged. The marriage was called off, even after the invitations were sent off.

Meanwhile, there are also reports that Salman Khan will soon meet his ex-flame Somi Ali in Miami.

On TV chat show Koffee With Karan hosted by filmmaker Karan Johar, the actor had said that he normally avoids his ex-girlfriends, as he doesn't want their past to affect their present.

Salman Khan, is a man who clearly sticks by his commitments, especially to the women he's loved. Salman has always maintained that he would be available for the women in his past in whatever capacity they deem fit. Indeed, Salman's Hangover seems to show that though he may be single, the actor is still committed to his exs.