Ahil is off to a vacation in Maldives with his mother, Salman's sister Arpita, and the rest of the extended family, revealed a picture shared by Arpita 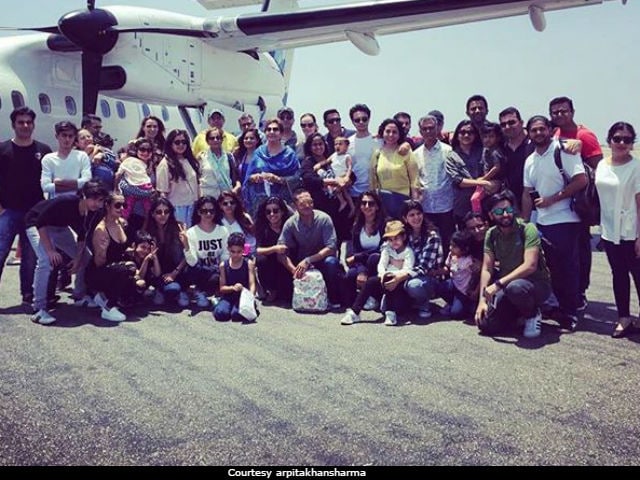 The birthday crew, featuring Ahil and the Khan-daan (courtesy: arpitakhansharma)

Salman Khan's nephew Ahil is all set to turn one on March 30 and has brought the Khan-daan together ahead of his birthday. Ahil is off to a vacation in Maldives with his mother, Salman's sister Arpita, and the rest of the extended family, revealed a picture shared by Arpita. The Instagrammed photograph of Ahil's 'birthday crew' features Salman's mother Salma, brother Arbaaz Khan, estranged wife Malaika, their son Arhaan and others. Salman's stepmother Helen can also be spotted in the family photograph but we are not sure of the 51-year-old actor is also there. All we can say is Ahil will have a lot more fun on his first birthday with mamu Salman by his side.
Here's the picture shared by Arpita:

Arpita also shared a photograph with Arbaaz in tow:

Ahil was born last year to Arpita and Aayush, who married in 2014. Ahil is their first child. Ahil is already a star on social media with his parents sharing pictures of him generously on Instagram and Twitter. Ahil's photos, particularly with the Dabangg actor, have always managed to go viral.
Meanwhile, Ahil has had quite an eventful year since he was welcomed into the khan-daan. Ahil has been part of Arpita's slumber parties and luncheons. He's also been spotted accompanying the Ek The Tiger actor on the sets of his upcoming film Tubelight. Arpita has also confessed on social media that leaving Ahil in the custody of her brother, who indulges his nephew to be at his mischievous best, creates trouble for her.


The things he does when I am not around @beingsalmankhan

Salman Khan is currently awaiting the release of Kabir Khan's upcoming war-drama Tubelight. Salman will also reprise his role in Tiger Zinda Hai, the sequel to his 2012 film, with Katrina Kaif.