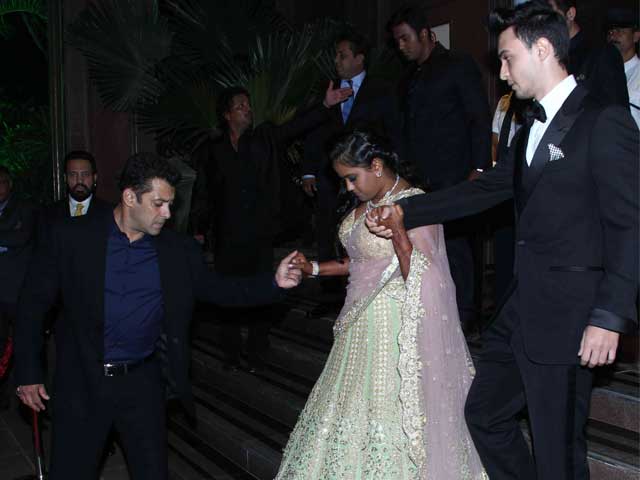 Salman Khan with Arpita and her husband Aayush at their reception in Mumbai.

"You feel anxiety. You wonder how she will manage her house, she has to prove herself as a good wife. I also know that she is on her own and will have her own experiences and challenges," revealed Salim Khan

The wedding festivities of Bollywood actor Salman Khan's sister Arpita concluded with a grand reception and now the Khan-daan seems to be feeling their beloved beti's absence. An emotional Salim Khan spoke about his advice to his daughter for her married life, how he sobbed on her bidaai and the void she has left behind.

In an interview given to The Times of India, Salim Khan said he had advised his daughter to treat her in-laws exactly as she treated her parents. "Love and respect your in-laws as much as you have loved and respected your own family and parents. There should not be any distinction in that."

Mr Khan also revealed that he was anxious about the challenges that lay before Arpita.

"You feel anxiety. You wonder how she will manage her house, she has to prove herself as a good wife. I also know that she is on her own and will have her own experiences and challenges. She also saw her father's marriage that stayed for 50 years and she would be thinking of how she too, can keep her marriage for 50 years. But I have met her in-laws and woh achche and simple log hain. She is blessed to have them."

Salim Khan also admitted he cried during his daughter's bidaai. "When you bring up a child, especially a daughter, for so many years and when she leaves your house, you feel so emotional that it is natural for you to start crying. The same thing happened to me when Alvira had got married. It had to happen with Arpita too."

For him, life is a "vacum after Arpita's marriage. "It feels like a vacuum. Kya aap kabhi bhi apni sabse chhoti ungli ki tareef karte ho kisi se? (Do you ever praise your smallest finger to anyone?) Do you ever thank God for giving your smallest finger? No. We don't even pay attention to it. But for some reason, due to an accident or otherwise, if God took away that finger of yours, you realise its value and utility. It's only when it is not there that you realise that you needed that finger in every work of your life. But it's a catch-22 situation. You feel the pain when your daughter is getting married as you want her to be with you forever, but at the same time, you also want her to get married, have her own family and kids."