Not much is known of Salman Khan's role in the film but because of these behind-the-scenes pictures we are not complaining. In all the pictures Salman's look remains the same - trousers, checked shirt and a half-sleeve sweater 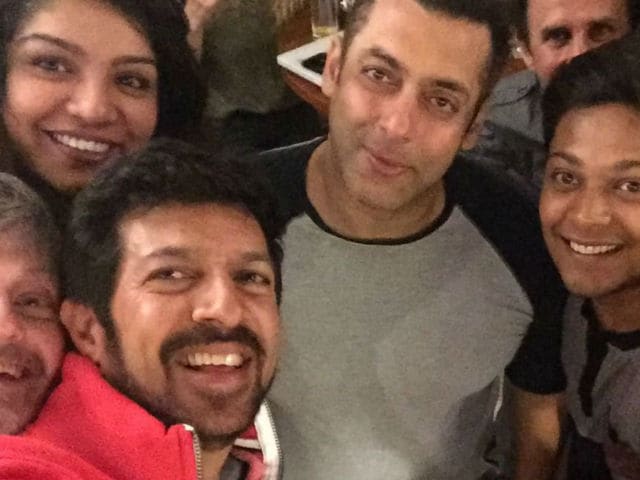 This image was posted on Twitter by Kabir Khan

Actor Salman Khan is filming Tubelight in Manali with Kabir Khan and fans are thrilled because the director shared pictures from the film's sets on Instagram.
Not much is known of the 50-year-old actor's role in the film but because of these behind-the-scenes pictures we are not complaining. In all the pictures Salman's look remains the same - trousers, checked shirt and a half-sleeve sweater.
Kabir, it seems, is very thorough with his techniques and doesn't mind going an extra mile to get the right shot:


The moment when shooting in real locations is worth all the trouble... #Mountain Light #Salmankhan #Tubelight # behindthescenes #Eid2017

This is Salman's second collaboration with Kabir after 2012's Ek Tha Tiger and 2015's Bajrani Bhaijaan. Both films shattered box office records. "It's been a great walk together," says Kabir.


Tiger.. Bajrangi... Tubelight... It's been a great walk together @beingsalmankhan #Tubelight #Manali #behindthescenes

Salman photographed "the moment before a shot":


The moment before the shot @beingsalmankhan #Tubelight #Manali #behindthescenes

The locals were happy to have Salman around:

A few weeks ago, Kabir's film met with a slight hurdle when weather played spoilsport for the director and crew. Kabir had a set constructed 12000 feet high in the mountains but on the day of the shoot it was covered in clouds.


We built a set 12000 feet high in the mountains. But when we went to shoot this is what happened #Living in clouds pic.twitter.com/kFeyjG8mNz

Tubelightflagged off in Ladakh earlier this year. The film also introduces Chinese star Zhu Zhu, who will star opposite Salman in the film. Zhu Zhu, a celebrity in China, has appeared in a handful of Hollywood films like The Man With The Iron Fists and Cloud Atlas.
Tubelight is slated for Eid 2017 release.