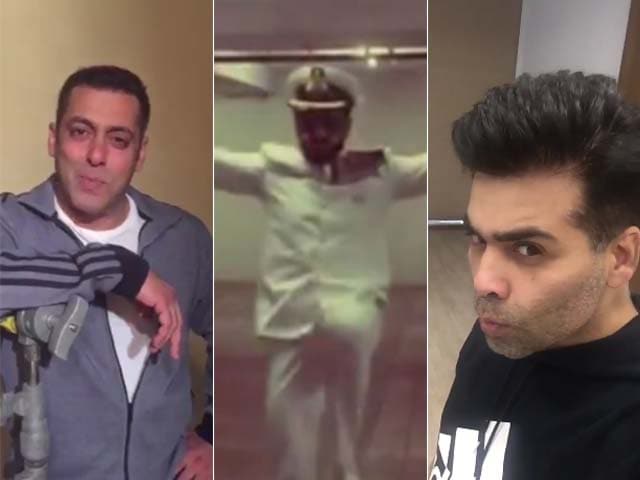 'Sultan has spoken,' tweeted actor Akshay Kumar a couple of days ago - who's next? Ranveer Singh and Karan Johar were next, in what is a massive PR win for Bollywood. All three - top achievers in Bollywood - posted videos promoting Akshay's new film, Rustom.
KJo's post is the latest. A slow clap for that pout.

Have to agree that we've never seen Ranveer out-pout KJo.
This Ranveer video is what Karan Johar was referring to.

Rustom himself was mighty impressed by Chhupa Rustom.

Ranveer, never one to do anything by half measures, also posted this old picture of himself with Akshay.


PRICELESS #Throwback !!! My Fanboy moment with the One & Only @akshaykumar ! #9DaysToRustom (Watch this space!)

It all began with Salman Khan's video message urging his fans to go watch Rustom.

Salman was, perhaps, paying it forward. Last year, his fellow Khans Shah Rukh and Aamir revealed the first look of his film Bajrangi Bhaijaan on Twitter.
In Rustom, Akshay Kumar plays Naval commander Rustom Pavri, a fictionalised version of K M Nanavati who was tried and acquitted for the murder of his wife's lover, leading to the scrapping of India's jury system.
Rustom, which also stars Ileana D'Cruz, will release on August 12, clashing with Hrithik Roshan's Mohenjo Daro.